END_OF_DOCUMENT_TOKEN_TO_BE_REPLACED

GOLD PRICES regained half of last week's losses on Monday morning in London as the US Dollar inched down ahead of US inflation data and the new Fed chief Jerome Powell's first congressional testimony, writes Steffen Grosshauser at BullionVault.
Federal Reserve chairman Jerome Powell will speak about US monetary policy before the House Financial Services Committee on Tuesday and the Senate Banking Committee on Thursday.
After suffering its biggest weekly drop in 2.5 months, gold rose almost 1% on Monday to touch $1340 per ounce before prices edged backed to $1333 as New York trading began.
Ahead of Thursday's key ISM measure of business costs – last reported jumping to the strongest since mid-2011 – the US Dollar meantime lost one third of last week's 0.9% rally from a 3-year low against other major currencies.
US Treasury bond yields eased lower from their recent multi-year highs.
"It's ambiguous what [gold's] role is as a hedge against inflation, but the thought that it has to go down when rates are going up is not established in any way," said Carter Worth, head of technical analysis at research and broker-dealer firm Cornerstone Macro, on CNBC's Futures Now.
Hedge funds and other large speculative investors raised their net long positions in Comex gold derivatives last week, according to the latest Commodity Futures Trading Commission (CFTC) data, rebounding to 52% above the long-term average.
So-called 'Managed Money' speculators in Comex silver contracts, in contrast, cut their bullish bets and raised their bearish bets yet again, holding a net negative position overall as a group for the second week running. 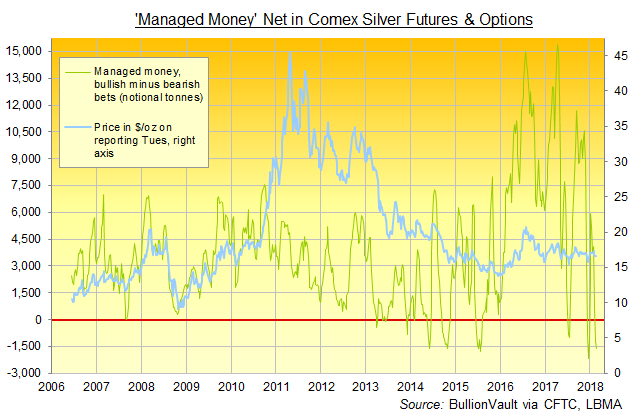 Silver prices rose with gold on Monday, touching 1-week highs against the falling Dollar at $16.76 before easing back 15 cents per ounce.
New research from US financial services giant Citigroup forecasts rising global inflation on stronger demand for industrial commodities in 2018, joining last week's growing consensus among analysts from J.P.Morgan to Macquarie and Fidelity.
But "higher inflation could trigger an across-the-board recession" due to lower investment and higher credit costs, warns German-based financial group Deutsche Bank.
With European Central Bank president Mario Draghi due to make a speech at the European Parliament on Monday afternoon, Europe's biggest economy is set to resolve a political deal this week that could ensure current chancellor of Germany Angela Merkel gets a fourth term in office.
The Euro climbed 0.3% ahead of today's New York opening – just 2 cents shy of its recent multi-year high at $1.25 – after Germany's federal statistics authority on Friday reported the country's government highest-ever budget surplus since reunification in 1990.
On the stock markets, the Europe Stoxx 600 Index jumped to its highest level in more than three weeks and the German Dax advanced 0.3%, gaining alongside most other equity markets in Asia and Europe.
"Global growth appetite [versus gold] is okay," says Singapore-listed bank OCBC' analyst Barnabas Gan.
"[Monday's rally] is not safe-haven demand per se, but more of a currency influence."