END_OF_DOCUMENT_TOKEN_TO_BE_REPLACED

GOLD PRICES edged higher on Monday morning in London, writes Steffen Grosshauser at BullionVault, holding close to a 7-session high at $1107 per ounce as a rebound in Asian stockmarkets faded in European and pre-US trade ahead of this week's decision on Dollar interest rates from the Federal Reserve.
"If gold can stay above $1100 in the coming days," reckons Mark To, head of research at Hong Kong's Wing Fung Financial Group, "it may signal a further rebound, maybe even to $1200 in the coming months."
"We believe the key reason for gold's weakness is the near-record short [speculative] position in paper markets," says a note from London bullion bank HSBC, "overriding robust physical demand and an outlook for declining supply.
"Gold short positions are increasingly vulnerable to short covering, threatened now by increased global risk levels."
Data on positioning in Comex futures and options show hedge funds and money managers holding their bullish and bearish bets on gold unchanged during the week to 19 January.
Gold bullion held to back shares in the giant New York-listed SPDR Gold Trust (NYSEArca:GLD) last week rose to the greatest level since early November, adding 3.4% since New Year as the gold price has gained 3.7%. 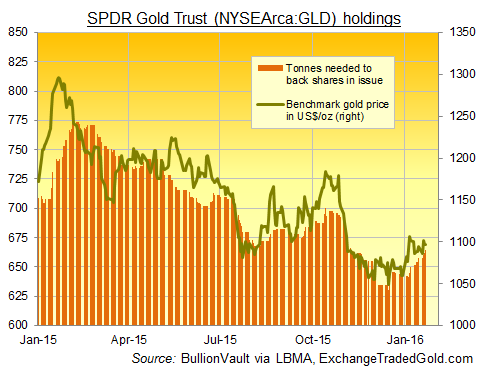 Silver ETFs in contrast have shrunk, with the iShares Silver Trust (NYSEArca:SLV) falling to its smallest size since mid-2012 as shareholders canceled 2% of its stock since New Year, even as the silver price has added around 1% in US Dollar terms.
"We see [silver's] recent lows of $13.75 and $13.65 as key supports," says a technical analysis from bullion bank Scotia Mocatta, "with 14.40 as pivotal resistance."
Silver on Monday doubled the gain of gold prices from last week's finishing level, rising above $14.25 per ounce on Monday morning but failing to touch Friday's brief 2-week high at $14.34.
Major government bond yields meantime eased lower as oil prices fell back from Friday's sharp rally after weak business sentiment data from Germany, the world's fourth largest national economy.
Gold priced in Euros touched its highest levels since the start of November as the single currency slipped further following last week's hint by European Central Bank president Mario Draghi that the ECB is likely to create additional QE at its next meeting in March.
"It is reasonable for investors to wonder whether Fed’s December rate hike was a policy error," says Bob Michele, chief investment officer of J.P.Morgan Asset Management.
"Historically the Fed has raised rates because either growth or inflation was uncomfortably high. This time is different – growth is slow; wage growth is limited; deflation is being imported."
Interest-rate futures currently put no chance on the Fed raising its key rate in this Wednesday's decision.