END_OF_DOCUMENT_TOKEN_TO_BE_REPLACED

GOLD PRICES fell to 4-session lows lunchtime Tuesday in London, erasing two-fifths of last week's 4.1% gain to trade at $1085 per ounce as China's stockmarket held steady for only the fourth time so far this year, and European stock markets jumped over 2% for the day.
With US corporates set to begin their latest quarterly earnings reports, Wall Street equity futures pointed more than 1% higher before the open.
Crude oil fell to new 12-year lows, and the British Pound hit its lowest level against the Dollar since mid-2010 after weaker than expected UK manufacturing data.
That buoyed the gold price in Sterling above £753 per ounce, a 10-week high when first reached last Thursday.
"Platinum and palladium reverted to their pro-cyclical industrial roles [last week] while gold and silver both benefitted from safe haven buying," says Jonathan Butler at Japanese conglomerate Mitsubishi.
But while the turmoil in world stock markets "was all for the good of gold," Butler warns, "we would caution that safe haven rallies in bullion tend to be short loved – as [Monday]'s price action attests."
"I am slightly disappointed that [gold] didn’t manage to close above $1100 again," says David Govett at London brokers Marex Spectron today.
"Looking for dips lower to hold the 55-day [moving average]" of gold prices, Commerzbank's technical analyst Karen Jones suggests in her weekly chart book that "the market is attempting to base from a longer term perspective" and setting an "upside target [of] $1131."
"Our measured technical move on this formation is $1130," agrees bullion bank Scotia Mocatta's daily technical analysis, saying "We are bullish the metal while it closes above the Double Bottom pivot of $1088."
Exchange-traded trust funds backed by gold needed to grow their bullion assets to match growing shareholdings yet again on Monday, with the giant SPDR Gold Trust (NYSEArca:GLD) expanding for a third session on the run, something only seen 4 times in all of 2015. 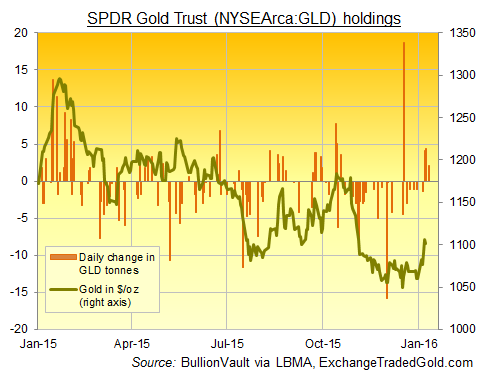 "Sell everything except high quality bonds," urges a note quoted by The Daily Telegraph from giant UK retail bank RBS's chief credit analyst Andrew Roberts.
"China has set off a major correction and it is going to snowball. Equities and credit have become very dangerous, and we have hardly even begun to retrace the 'Goldlocks love-in' of the last two years."
"[China's] economy may not be the ultimate problem here," says Reuters editor Eric Burroughes on his personal macro(il)logic blog.
"[Beijing's] obviously bad decisions and ham-handed policy meddling are starting to threaten...the [Communist Party]'s ultimate success and claim to legitimacy...[which is] further economic growth and prosperity."
Ahead of the Chinese Yuan falling to new 5-year lows this month as commodity-nation currencies led by the South African Rand and Mexican Peso hit record Dollar lows, global FX trading volumes fell in December by more than one-fifth from the same period in 2014, services provider CLS said overnight.
FX volumes hit a new all-time high as recently as September, CLS data showed earlier, reaching over $5 trillion per day.
"In a world of what could be perceived to be competitive currency valuations, you want to hold a store of [value]," says £9 billion UK investment manager Gareth Lewis at Tilney Bestinvest, commenting on his added allocation to gold.
Although "early" in 2015, and now wearing a small loss, "Gold was put in as a portfolio insurance policy against the fact the Dollar may unwind," Lewis says.