END_OF_DOCUMENT_TOKEN_TO_BE_REPLACED

GOLD PRICES headed for their first weekly drop in 9 on Friday, but held onto a $25 rally from Wednesday's 2-week lows despite the United States reporting much stronger-than-expected January jobs data as the coronavirus outbreak and lockdown in China saw the death of a whistleblower spark anger with the authorities on social media.
Asian and European stock markets meantime snapped their rally from the last fortnight's falls on worsening news of the coronavirus outbreak, leaving Shanghai's CSI300 index 2.5% below where it closed before the Chinese New Year on January 25.
"Worries about the coronavirus' impact on the global economy have stoked demand for safe haven assets," says the latest weekly note from specialist consultancy Metals Focus, "which in turn has favoured gold" among investment managers.
World No.1 gold-backed ETF product the SPDR Gold Trust (NYSEArca: GLD) has so far swollen by 1.3% as investors have grown the size of the GLD this week, helping extend the sector's 2.1% expansion worldwide to a new all-time record size last month.
But for consumer demand – already the weakest worldwide in 2019 for a decade – "It is worth stressing that prior to the outbreak of coronavirus, [China's] jewellery sector was already facing several headwinds," Metals Focus say, "including weak consumer sentiment, the sharp rise in gold prices, and ongoing structural changes, such as shifting to smaller/lighter designs."
With Chinese cities and shopping malls deserted amid what would typically be a weak season for demand after the Lunar New Year peak, gold retailers in No.2 consumer market India meantime reported some 'bargain hunting' mid-week as bullion eased back. But domestic prices continue to hold near all-time record highs – deterring household demand, and forcing dealers to offer product at a discount to world prices. 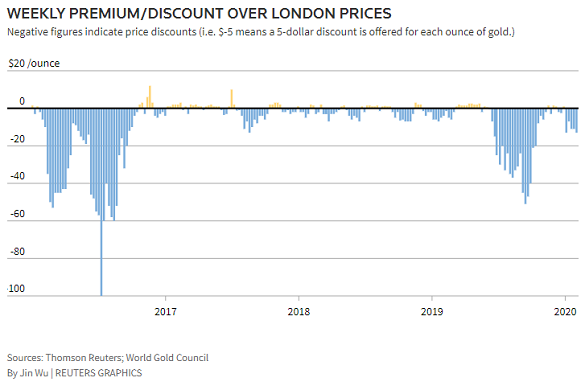 "We have not shelved our plans to have a gold policy," said an official from the Department of Economic Affairs to HinduBusinessLine today, announcing a new survey to gauge household interest in gold and repeating the aim – first discussed 5 years ago – of approving a recognized bullion exchange.
Converted to US Dollars, the gap between Chinese mainland and world gold prices today fell near zero, offering no incentive for new imports from trading hub London into the metal's No.1 consumer nation.
Averaged since Monday, Shanghai premiums halved from last week's level, falling to the lowest at $2.50 per ounce since autumn 2018 and suggesting soft domestic demand against supply.
With the death-toll rising but the official infection rate from coronavirus slowing, China's Communist government today confirmed the death of Li Wenliang, a 34-year-old ophthalmologist who warned fellow users of WeChat about a "SARS-like virus" back on 30 December but was then ordered by police to stop spreading "false rumors" before continuing to assist victims and falling ill himself.
China's social media is seeing "[an] outpouring of emotions [similar] to that on October 1 last year – the 70th founding anniversary of the People's Republic of China," says the Inkstone blog – "Except that this time, people are angry, not pleased, with the government."
Priced in the Dollar today, gold showed a near-$15 loss from last Friday's benchmarking in London – heart of the world's gold bullion market – but edged up to $1571 per ounce even after the Bureau of Labor Statistics said non-farm employment grew by 225,000 last month, with average wages accelerating to 3.1% annual growth.
The jobless rate however rose one tick from this winter's half-century lows, reaching 3.6% as the number of unemployed people held unchanged at 5.9 million on the BLS figures.
The UK gold price in Pounds per ounce meantime rose to £1213 – its highest Friday finish since last autumn's all-time highs – while the gold price in Euro terms slipped €2 from last weekend's new record to trade at €1430.
All US sectors saw jobs growth or little change except manufacturing and motor vehicles, the BLS report says.
"The United States have not had a recession since [the early 1970s] without service sector jobs contracting," said a note from Swiss refining group MKS Pamp earlier this week, commenting on equally solid US jobs estimates from the private-sector ADP Payrolls provider.
"So [today's] data will lift growth and earnings expectations," likely adding to the 'risk on' attitude across financial markets.