END_OF_DOCUMENT_TOKEN_TO_BE_REPLACED

GOLD PRICES rose in London trade Monday, touching its highest Dollar price since late-July as world stock markets extended last week's steep falls.
Rising to $1233 per ounce, gold prices set multi-month highs against most major currencies, reaching €1065 for Eurozone investors and £936 in Sterling as talks between the UK and European Union again hit the "real problem" of how to avoid a hard border between Northern Ireland and the Republic of Ireland after next March's Brexit.
Western government bond prices rallied, pulling long-term interest rates back down from their recent multi-year highs.
Italy's cost of borrowing held firm however, keeping the spread above Germany's key Bund rates at more than 300 basis points – a 5-year high when reached at the start of this month following the coalition government's new 2019 deficit spending plans.
Betting that the price of Italy's bonds will fall further, driving yields still higher, is now heavier than any time since the "populist" government of right-wing Lega and left-wing M5s politicians took power in June, reports the Financial Times.
Net of bullish betting on the gold price meantime, betting among hedge funds and other speculators that the metal would fall grew to a new series record last week, latest data from US regulator the CFTC say.
Taken on Tuesday – before Thursday saw the fastest 1-day jump in gold prices since 2016 – the figures put the Managed Money's total short position on Comex gold futures and options at the equivalent of 590 tonnes, just shy of late August's record.
Bullish betting among that group of traders meantime fell to the equivalent of 269 tonnes, the lowest since end-2015's six-year lows in the Dollar gold price. 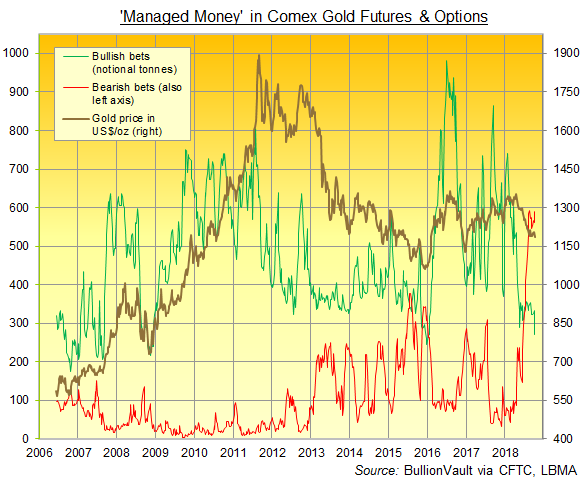 "We believe gold is likely to have received its biggest boost [last week] from short covering," say analysts at German financial services group Commerzbank, noting the record size of the net short position ahead of Thursday's price jump.
"If this entire quantity were to be bought back, the gold price would no doubt increase considerably."
Over in the currency market, China's Yuan fell and then recovered overnight, touching last week's 17-month lows versus the Dollar, after US Treasury Secretary Steve Mnuchin said he had "productive" talks with Chinese officials at the weekend's IMF and World Bank meetings in Bali, confirming that Beijing doesn't  want to see the currency continue to depreciate.
Mnuchin is also "not losing any sleep" he added over claims that Beijing could dump its massive holdings of US Treasury bonds, driving Dollar interest rates higher, as part of the tit-for-tat trade war over import tariffs.
"Only moderate demand seen from Chinese traders on the open," says Monday's Asian gold trading note from Swiss refiners and finance group MKS Pamp.
With Chinese gold prices at the highest since April, "Volumes were more subdued than last week," MKS adds, noting that the Shanghai premium – over and above comparable quotes for London settlement – remained "fairly stable around $5-6" per ounce.
Gold's No.2 consumer nation India could see Rupee gold prices rise another 3% between now and next month's key Diwali festival, reckons Surendra Mehta of the India Bullion & Jewellers Association, pointing to worsening problems for household lenders outside of the regulated banking sector.
"Right now, there is no asset class in the market which can give good returns," Mehta says, calling equities and bonds "a bloodbath.
"Even the non-banking finance company (NBFC) sector is in crisis."
Platinum prices also rose with gold to multi-month highs on Monday, but silver lagged behind, achieving only a 2-week high at $14.75 per ounce.