END_OF_DOCUMENT_TOKEN_TO_BE_REPLACED

GOLD PRICES rose near 1-year highs against the Dollar and British Pound on Monday morning in London after jumping at the start of Asian trade amid reports that North Korea will follow its series of nuclear weapon tests with an intercontinental ballistic missile (ICBM) launch, writes Steffen Grosshauser at BullionVault.
While world stock markets fell 0.5%, the spot gold price jumped by 1% to $1338 per ounce – the highest since 26 September 2016 – after the regime of Kim Jong-un in Pyongyang hailed its sixth nuclear test, said to be a hydrogen bomb with "unprecedentedly big power".
US Defence Secretary James Mattis reacted by warning of a "massive military response" if the US or an ally were threatened.
With North Korea firing a missile-test across Japan last week, new data released Friday said Comex gold contracts saw betting on higher prices by the Managed Money category of trader increase almost 17% to reach its highest level since September 2016.
Bearish 'short' positions amongst hedge funds and other money managers in contrast shrank to the fewest since 2012. 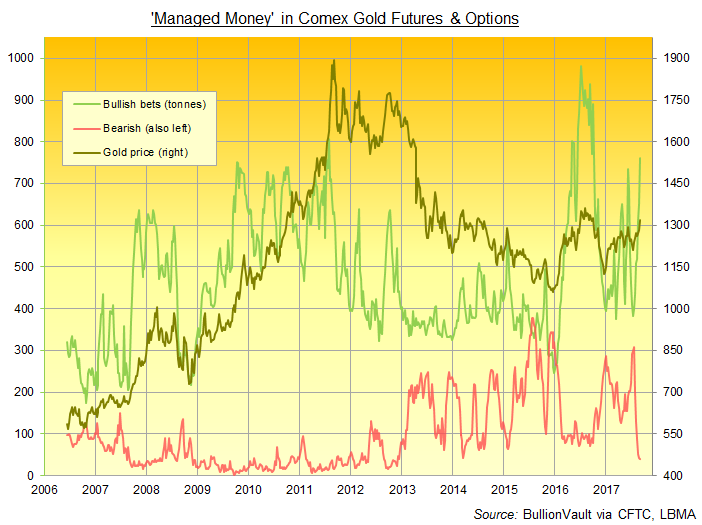 Demand for new shares in the world's largest gold-backed exchange-traded fund vehicle, the SPDR Gold Trust (NYSEArca:GLD), grew Friday at the fastest  daily pace since the UK's shock Brexit referendum result in mid-2016, needing an extra 14.5 tonnes of bullion.
That took the GLD's total gold backing to 831 tonnes. The gold price in Dollars has gained $100 per ounce since the GLD was last that large, back in early July.
"What dominates the [gold] market is really the geopolitical tensions right now, either in North Korea or in the United States," reckons research head Mark To at Wing Fung Financial Group in Hong Kong.
"The technical uptrend is well established," says analyst Jonathan Butler at Japanese conglomerate Mitsubishi, "there is continuing uncertainty over North Korea's nuclear ambitions, and an imminent wrangle between Congress and the White House over the debt ceiling that must be solved by late September to avoid technical default."
"We had expected gold prices to bottom out close to $1200 per ounce," says Dutch bank ABN Amro's FX and precious metals strategist Georgette Boele, "but we didn’t foresee this sharp rally in gold prices we have seen so far."
"The longer term gold price outlook should be positive."
Silver tracked gold prices Monday by climbing 1% to touch a 4-month high at $17.89 per ounce, while platinum prices extended their rally to 6-month highs at $1014 per ounce.
Palladium hit $993, its highest price since the all-time record highs of January 2001.
So-called "safe haven" assets such as the Japanese Yen and sovereign bonds also gained Monday, but the US Dollar fell further on the currency market after Friday's weak jobs data dented expectations of a Federal Reserve rate rise.
The European Central Bank in contrast, set to meet this Thursday and supported by solid growth in the Eurozone, will set out a reduction of its monthly QE asset purchase program in October, according to a Reuters poll of economists.
"Such short-term risk-aversion trades tend to be short-lived," counters economist Johanna Chua at US banking giant Citigroup.
"Unless the global response to this test raises the probability of a military strike or North Korean regime collapse, this time may play out similarly."