END_OF_DOCUMENT_TOKEN_TO_BE_REPLACED

OVERNIGHT gold price gains of almost 1% were halved in London trade Thursday lunchtime as world stock markets ticked higher following yesterday's new record highs in the US S&P500 index.
The Dollar rallied on the FX market despite what analysts called "cautious" comments on the issue of raising interest rates from the US Federal Reserve's latest policy-meeting minutes.
After finishing last week at $1255 and trading in a tight 1% range since then, the gold price fell Thursday back to $1255 per ounce – just below its daily average of $1260 since 25 May last year.
Silver in contrast pushed back towards Tuesday's 3-week highs at $17.30 per ounce, while platinum prices rose towards 1-month highs above $950 per ounce.
"It would seem that the market has looked out of the window and decided that the summer lull is already upon us," says London broker David Govett at Marex Spectron.
"Boring unfortunately does not really do justice to the recent moves and I see very little changing in the near future."
Wholesale gold-market trade association the LBMA today launched its new Precious Metals Code, requiring all trading members to sign a commitment to and implementation of its principles in what chairman Paul Fisher – formerly at the Bank of England – called "an important step forward to build greater trust, consistency and transparency throughout the market."
Launched as an "independent...transparent" and formally-regulated benchmark in 2015, the LBMA Gold Price process has meantime lost the participation of four banks, Reuters reported on Thursday, after administrator IBA – part of the ICE derivatives trading exchange – added a requirement to accept new ICE gold futures contracts before those banks were ready.
Enabling IBA to clear each auction's final trades centrally through ICE's systems in New York, this "removes the need for firms to have large bilateral credit lines in place with each other...opens up the auction to a broader cross section of the market and also facilitates greater volume," the administrators said when adding the requirement in April.
But volumes have fallen sharply since then, as Reuters notes, albeit recovering from April's 50% plunge on an average daily basis from the IBA auction's prior average. 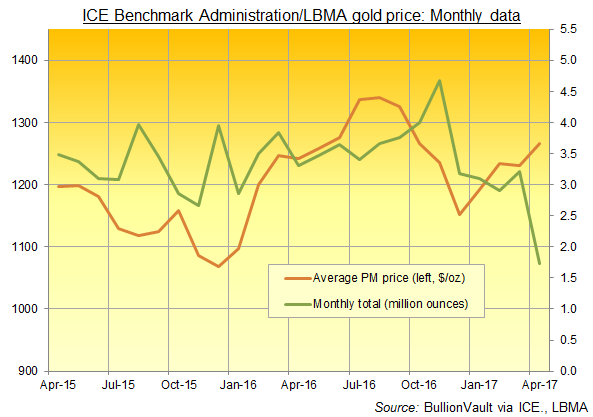 Thursday morning's LBMA Gold Price auction saw 8 direct participants out of a possible 15 find a price of $1257.10 per ounce to balance the greatest volume of buying and selling demand, matching some 56,000 ounces.
"When clearing for the auction was launched last month, four banks – China Construction Bank, UBS, Standard Chartered and Societe Generale – ceased participating," says Reuters, claiming that "at least one of the four...were among those willing to offer flexible liquidity during the auction, according to...sources."
Having participants change their orders in response to the auction's suggested prices was a key feature of the former 'Gold Fixing' process running from 1919 until 2015, and described by economists as 'tatonnement'.
Only one of those four banks, SocGen, is backing ICE competitor the London Metal Exchange's forthcoming LMEprecious contracts for loco-London futures.
Fellow London bullion market-makers Goldman Sachs and Morgan Stanley remain as LBMA Gold Price participants whilst also backing the LME product – now due sometime in summer 2017 – as does clearing-bank and vault operator ICBC Standard Bank, part of the world's largest banking group, China-based ICBC.
On 11 April 2017, the day after IBA added the futures contract requirement, the LBMA Gold Price fixed some 0.9% below the mid-point average of bullion market 'spot' quotes, where each buyer and seller trades directly with one another in a unique deal – a market structure known as 'over the counter' (or OTC) to  distinguish it from centrally-cleared exchange-traded contracts.
28 January 2016 saw the similarly new Silver Price auction process settle 7% below spot prices on what participants called "anti-arb compliance" rules, appparently enforced internally by member banks to block their staff from changing their orders or trading other markets during the process – a key feature of the previous Silver Fixing run daily since 1897.
Currently run by US-based derivatives trading exchange the CME together with data and news providers Thomson Reuters, the LBMA Silver Price will go to a replacement provider sometime this summer according to specialist news-site Metal Bulletin, chosen from an apparent shortlist of "two exchanges and one fintech company."
Gold's current benchmarking has seen net volumes average some 80,000 ounces since administrators IBA began running the auction in March 2015, greater than the average of fewer than 45,000 ounces recorded over the final week of the previous London Gold Fixing process.