END_OF_DOCUMENT_TOKEN_TO_BE_REPLACED

GOLD PRICES jumped to new 5-month highs above $1286 per ounce Thursday morning but curbed their gains for non-Dollar investors after the US currency fell hard on President Trump's comment that the greenback "is getting too strong."
Despite easing from the 13-year highs reached immediately after Trump's election last November, "Partially [this strength] is my fault because people have confidence in me," Trump told the Wall Street Journal.
"But that's hurting [exports] – that will hurt ultimately."
The Dollar rebounded today from sudden overnight 1-week lows against the Euro and Sterling, but regained barely half-a-Yen from its lowest level versus the Japanese currency since Trump's victory over Hillary Clinton.
Dollar-gold prices have become increasingly correlated in 2017 against the USD/JPY currency cross in, with the rolling 1-month relationship falling to a near-perfect inverse correlation of -0.991 last week.
That has curbed the gold price in Yen at just 5-week highs of ¥4,518 per gram today, defying US and other hedge-fund traders expecting to extend gold's potential by buying it "in Yen terms". 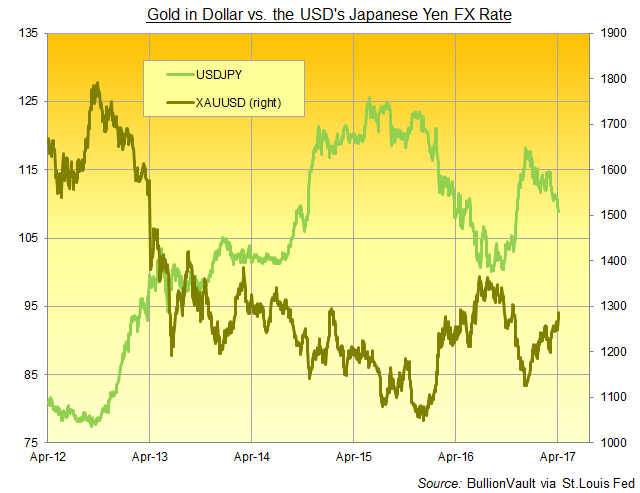 After weak demand hit the global benchmark LBMA Gold Price auction amid Tuesday's $20 jump in spot prices, one major bullion bank today told BullionVault it has seen mining-producers selling gold on the current surge.
Its traders now see gold's near 6-year downtrend – a line it has failed to break above since the $1920 peak of September 2011 – coming in around $1290 per ounce.
European stock markets meantime fell for the fourth session running on Thursday, with the Euro Stoxx 50 index trading 1.5% below end-March's 18-month high.
Major government bond prices rose in contrast, pushing 10-year US Treasury yields down to their lowest since Donald Trump won the US election last November at 2.24%.
With 10-year US yields touching 30-month highs above 2.60% only at the end of March, "End of the Golden Age?" asked a note late last week from French investment and bullion bank Natixis.
Metals analyst Bernand Dahdah repeated his average 2017 gold price forecast of $1150, predicting "pressure" from 3 more US Fed rate hikes, plus a move to QE tapering by the European Central Bank, now expected in September.
The ECB at its March meeting already  trimmed money creation and spending on Eurozone government debt from €80 billion to €60bn per month.
Gold has now averaged $1223 over the first 15 weeks of the year.
"As a watchdog, gold has failed to bark," says today's new edition of the weekly Economist magazine, printing an article apparently written just before Tuesday's jump.
"Buying bullion is really a bet that...events escalate in the Middle East and North Korea or that central banks lose control of monetary policy," The Economist says. And so "the metal has not performed as well as it might have done given the geopolitical headlines."
Tuesday saw Comex volume in bullish gold options – the most leveraged derivative contracts, exposing the holder to price swings for just a few cents on the Dollar – jump to 10 times Monday's total according to Bloomberg.
Trading in Comex gold futures had already risen 16% in the first 3 months of this year compared to Q1 2016, driven by volatility in US interest-rate expectations according to senior economist Tatsufumi Okoshi at Nomura Securities.
Gold prices yesterday marked the 4th anniversary of the start of Spring 2013's historic crash by rising another 1.7% at the London benchmarking auction to reach $1274 per ounce – a new 5-month high.
Demand to buy gold in this physical market was weak yet again however, with Thursday's AM auction then attracting just half the interest to buy as there was to sell at an opening price of $1287 before finding a balance almost $1 per ounce lower.
Giant gold ETF the SPDR Gold Trust (NYSEArca:GLD) ended yesterday needing 842.4 tonnes of bullion backing, unchanged from Tuesday's growth in the number of shares in issue to a 5-week high.
Gold prices in Shanghai closed Thursday at a $10 premium to London quotes, edging higher from the lowest incentive for new imports to the world No.1 consumer nation since immediately after the Chinese New Year holidays.
Silver also broke higher to its best in 5 months on Thursday, moving through $18.50 for the first time since Trump's election.
Platinum continued to lag however, rising to only 1-week highs at $977 per ounce.
That widened platinum's historic discount to gold prices back out to $310, the greatest gap since last October's run to a record $340 per ounce.