END_OF_DOCUMENT_TOKEN_TO_BE_REPLACED

GOLD PRICES rose to $1240 per ounce in London on Wednesday, regaining almost half of their post-US election slump as Euro stock markets slipped and government bond prices rose amid fresh fears over the currency union's 2017 political outlook.
With France's establishment presidential candidate François Fillon urging voters to reject anti-Euro "disunity" contender Marine Le Pen amid a scandal over gifting public funds to his wife, rioting spread for a fourth night in the high-unemployment Department 93 suburbs of north-eastern Paris on Tuesday after police were accused of viciously assaulting a young man, visited in hospital yesterday by current President François Hollande in a bid to calm the situation.
Calling for a referendum on Italy's membership of the Euro meantime, the anti-establishment 5-Star Movement is polling neck-and-neck with the ruling PD Party ahead of this year's national elections, while 3rd largest party the right-wing Northern League is calling for 'Italexit' from the European Union entirely.
Two years after Scottish voters rejected independence from the UK by 55% to 45%, support for splitting has surged as the Parliament in London moves to make a "hard Brexit" from the EU, according to a new poll for The Herald newspaper.
Scotland voted 62% in favor of staying in the EU at last June's referendum.
Silver tracked Dollar gold prices higher Wednesday, reaching $17.83 per ounce to trade 14% higher from December's 8-month low following Donald Trump's win in the US presidential election.
Gold priced in the Euro currency meantime recovered its pre-US election level at €1162 per ounce, adding 2.7% for the week so far and gaining 8% from late 2016's low. 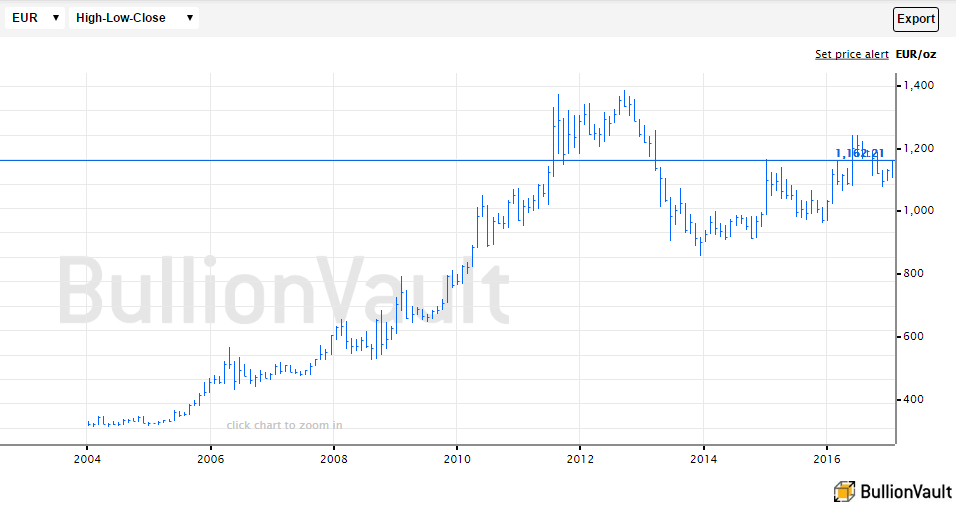 Shanghai gold premiums, over and above comparable London quotes, rose overnight to $9 per ounce, extending China's strongest post-Lunar New Year incentive to bullion importers since 2013.
Bullion holdings for the giant gold-backed ETF product the SPDR Gold Trust (NYSEArca:GLD) expanded yet again Tuesday, swelling for a 5th consecutive session to reach a new 6-week high as investor demand grew for its shares.
The largest silver ETF in contrast – the iShares Silver Trust (NYSEArca:SLV) – was unchanged in size at last week's new 7-month low.
New 13F regulatory filings from giant US bank and brokerage Wells Fargo last week showed it cut holdings in the GLD gold ETF by one-third as gold prices fell in the last 3 months of 2016.
New filings Tuesday say investment and bullion bank  J.P.Morgan halved its position, but the US state of New Jersey's common pension fund, in contrast, grew its GLD holdings by over 60% to a value of $99 million at the stock's current price.
That equates to barely 1/8th of one per cent of the fund's total assets however.
"Gold was down a lot [in December], so I bought it," Bloomberg News today quotes money manager Stan Druckenmiller, head of the highly successful Duquesne Capita from 1981 to 2010, who previously announced that he'd sold a position in gold the night of Donald Trump's victory in November's US election.
"I wanted to own some currency and no country wants its currency to strengthen."
But "for many institutional investors," Reuters today quotes Phil Edwards at pension-fund investment advisors Mercer, "it's quite difficult to justify a strategic allocation" to any physical commodity, including gold.
"Instead," says the news-wire, "long-term investors are putting cash in so-called real assets, such as property, infrastructure and shares in natural resource companies rather than the resources themselves."