END_OF_DOCUMENT_TOKEN_TO_BE_REPLACED

GOLD PRICES extended last week's 2.4% gains to reach new 3-month highs on Monday in London, briefly breaking above $1230 per ounce even as the US Dollar rose on the FX market amid news of French presidential candidate Marine Le Pen calling for 'Frexit' from the European Union, writes Steffen Grosshauser at BullionVault.
Silver rose alongside, but lagged the new highs in gold prices to hit $17.66 per ounce – some 6 cents short of Friday's new 12-week peak.
Proposing a 10% cut to France's income tax rate for lower-earners, plus retention of the 35-hour working work, Le Front National's 144-point manifesto says Le Pen would begin 6 months of "radical" renegotiations on France's membership of the EU if elected in May.
Fearing a loss of access to the EU's 500 million consumers, more than half of UK business leaders believe the British economy has already suffered from last year's Brexit vote, despite the actual process of leaving the EU not having begun, according to the Ipsos Mori opinion pollsters.
With European shares inching lower – and French bond yields doubling so far in 2017, rising sharply above comparable German rates – gold added 0.8% for the week so far to reach the highest Dollar price since mid-November.
"Gold and silver [could] continue to move higher in February," reckons brokerage INTL FCStone analyst Edward Meir, "largely on account of the continued weakness in the Dollar, coupled with geopolitical developments."
While new US president Donald Trump and Nato alliance chief Jens Stoltenberg discussed the escalating violence with pro-Russian separatists in Ukraine's easterrn Donbass region with at the weekend, "The [US] standoff with Iran is the most problematic," says Meir, because "if tensions escalate...one side or the other could pull out of the nuclear accords.
"We could see an immediate spike in gold."
Looking further ahead, "gold will climb about 6%" in 2017 due to "the amount of political risk being created by this new US president," reckons Independent Strategy analyst David Roche.
Winner of the London Bullion Market Association's 2016 Forecast competition, Swiss bullion bank UBS's analyst Joni Teves now sees gold prices averaging an 8% gain this year in Dollar terms, citing "elevated macro risks" to other investment assets.
Money managers betting on gold prices through Comex futures and options grew their bullish positions and cut their bearish contracts as a group last week, new data showed late Friday.
Altogether, that raised their 'net speculative long' position on gold prices by more than one-fifth to an 8-week high, still only 60% of the last 10 years' average. 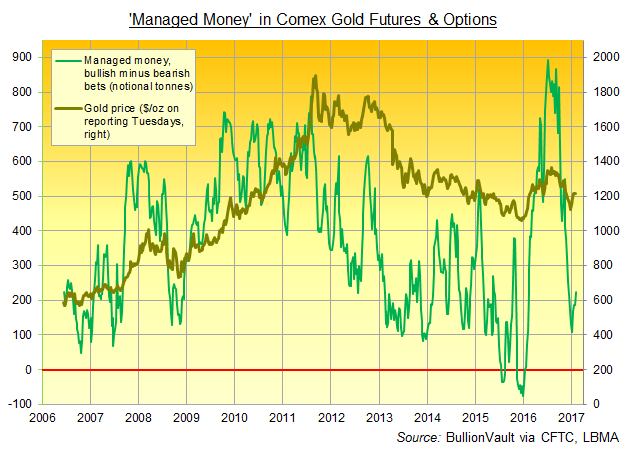