END_OF_DOCUMENT_TOKEN_TO_BE_REPLACED

GOLD PRICES rose near 3-month highs in London trade Monday morning, briefly touching August's high at $1169 per ounce as the US Dollar fell on the FX market and a strong rise in Asian stock markets failed to buoy European shares.
Silver meantime failed to break back above $16 per ounce however, and gold then retreated 0.5% after this morning's auction to find its market-wide clearing price on behalf of members of the London Bullion Market Association came in at $1164.20 per ounce, the highest benchmark gold price since 24 August, and on similarly low trading volumes.
With 1 week to go before the gold and silver market's annual LBMA conference – held this year in Vienna – gold prices were today on track to avoid a year-on-year gain between these key presentation and networking events for the first time since 2010.
Delegates at last year's LBMA conference in Lima, Peru had been more bullish, forecasting on average a price of $1200 per ounce by the 2015 event. 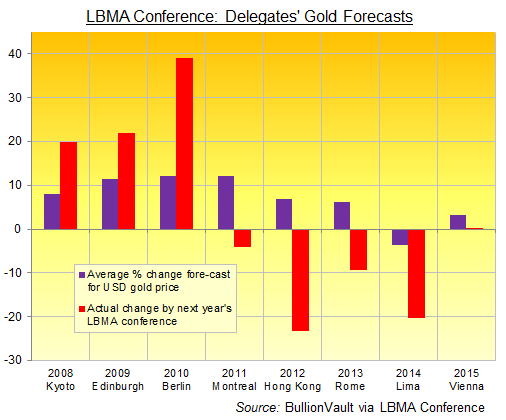 Market-making member of the LBMA Mitsui & Co. – a division of Japanese conglomerate Mitsui, founded in 1876 and named last month as being under investigation by Swiss competition regulators for "possible collusion" along with 6 banks over bid-and-ask prices in the spot market – will apparently shut its London and New York precious metals businesses later this year, according to two anonymous "sources" speaking to newswire Thomson Reuters today on the sidelines of the London Metal Exchange's opening LME Week seminar.
"A spokesman for the Japanese trading house declined to comment," Reuters says.
Besides quoting bid and ask prices for both gold and silver bullion in 'spot' trade, Mitsui & Co's London subsidiary is also a participant in the daily LBMA Silver Price benchmark auction.
All of the other 5 direct participants are banks.
"One thing remains certain in an uncertain world," said a dealing note from Mitsui's Hong Kong office Friday, "and that is that positive 'animal spirits' still seem scarce" in precious metals trading.
New analysis from fellow market-maker, US investment bank Morgan Stanley – a direct participant in silver's sister benchmarking process, the LBMA Gold Price – today repeated its 2015 average gold forecast of $1154, with a longer-term price of $1100 per ounce.
Gold bullion prices face 5 risks, Morgan Stanley's team says, pointing to better US growth, "universally low inflation", the potential for "loss-covering liquidation in China" as its slowdown hits real estate and equity prices, lower anxiety of 'Grexit', and a lack of support from mining costs as the sector benefits from lower oil prices in particular.
US investment bank Goldman Sachs – also a London market maker, and a direct participant in London's gold and platinum price benchmark auctions – today repeated its 3-month forecast of $1150 gold, with a drop to new half-decade lows $1050 in the next 12 months.
Conference chat at LME Week meantime focused on the growing "glut" of base metals being supplied to the market as China's growth rate slows, plus counterparty and credit-default risks worsened by the recent 7-year lows in prices.
"Continued uncertainty has weighed on volatility and risk appetite," says specialist site Fast Markets, "making for a chilly and barren landscape for traders and brokerages."