END_OF_DOCUMENT_TOKEN_TO_BE_REPLACED

GOLD INVESTMENT prices rose from 3-week lows but struggled to hold gains versus major currencies on Thursday as world stock markets retreated from new all-time highs amid news that neither Japan nor the Eurozone plan to add more monetary stimulus for the time being.
Briefly topping $1320 per ounce, €1200 in Euros and £1000 for UK investors, gold edged back at lunchtime in London as the European Central Bank announced no change to either its QE bond-buying or zero refinancing rate, nor a further cut to its 0.4% negative interest rate on commercial bank deposits.
European equities meantime slipped for the first session in five as commodity prices edged higher with major government bond yields.
Investment gold had earlier sunk 1.1% versus the Yen, briefly falling below ¥4,500 per gram as the Japanese currency soared following a BBC interview with Bank of Japan chief Haruhiko Kuroda in which he ruled out printing and giving money to government or business – so-called 'helicopter money' – to try and end 27 years of asset-price, GDP and consumer-price deflation.
The Yen then slipped, and gold rallied, as the BBC said the interview was recorded in mid-June, before the UK's Brexit referendum result.
"In quiet [summer] conditions," says a note from global investment and London bullion bank HSBC's James Steel, "the gold market may gravitate to the vicinity of large round numbers, with $1300 the closest and most obvious.
"[But] there may be limits to further declines. Geopolitical risks remain. This should help cushion [gold prices]."
A key investment vehicle for money managers wanting exposure but not ownership of gold, the giant SPDR Gold Trust (NYSEArca:GLD) ended yesterday reporting 865 tonnes of gold held to back its shares – a failure to grow for more than two weeks not seen since April. 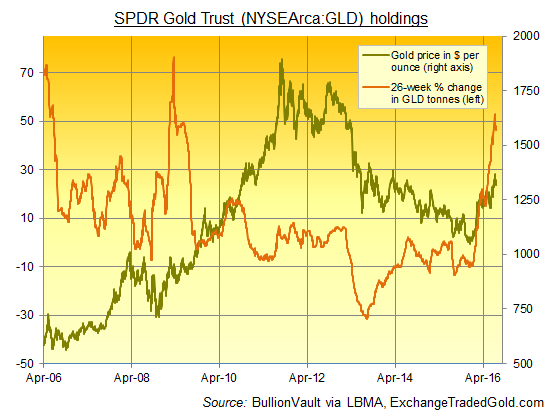 The GLD remains 50% larger from the end of 2015 however, with demand for the shares growing at its fastest pace since the US and world stock markets hit 13-year lows in early 2009.
"A correction in global credit markets is unavoidable," said the S&P ratings agency on Wednesday, warning that "nearly half of corporate debt issuers are estimated to be highly leveraged."
That risks a "spike" in defaults, "likely through the next few years."
Looking at Italy's €360 billion of sour banking loans, "The scale of Italy's economy would make any crisis a Greece-on-steroids drama," says the latest weekly analysis from specialist bullion analysts Metals Focus, looking at the potential impact on gold investment and prices.
"During a recent field trip to Italy [however], locals were typically quite sanguine about the whole matter, hinting that international press coverage has often been exaggerated and that 'problem' not 'crisis' is the better description."
A referendum on constitutional reform scheduled for October "is expected to turn into a vote of confidence on [Prime Minister Matteo] Renzi and on the EU's handling of the economic crisis," says EUobserver.com, pointing to growing support for the left-leaning 5 Star Movement and even an EU exit following the UK's June decision.
The Spanish government meantime sold new 3-year debt on Thursday at a negative interest rate for the first time ever, raising €1.71 billion at an annual return to investors of -0.072%.