END_OF_DOCUMENT_TOKEN_TO_BE_REPLACED

GOLD INVESTING prices held above $1200 per ounce Thursday morning as European stockmarket rose but London share prices fell amid the start of UK negotiations with the EU to avoid 'Brexit', and the US Dollar rose to 2-week highs against the single Euro currency.
UK prime minister David Cameron was due to meet EU head Jean-Claude Juncker in Brussels to discuss amends to Britain's terms of membership.
Senior figures in the ruling Conservative government fear "turmoil" in Europe, says the Financial Times, if UK voters do choose to exit in the referendum promised by end-2017, and now likely this June.
Gold priced in Pounds slipped Thursday below £840 per ounce, cutting investing gains in Sterling terms to 16.7% so far in 2016.
Yuan gold prices meantime held steady in Shanghai, and moved to a small premium above global Dollar-price quotes but on the lowest trading volume since China returned from its week-long New Year's holidays on Monday.
"There is [now] a sense of fragility," says one bullion bank's sales desk, "and gold is being kept afloat only by ETF demand, which continues pouring in – albeit at a slower pace.
"It seems like investors are now loaded with gold."
Investor demand for the SPDR Gold Trust (NYSEArca:GLD) held steady on Wednesday, with the quantity of gold bullion backing the ETF unchanged at 710 tonnes – a 7-month high, but still almost half the amount needed at the GLD's peak of end-2012.
Yesterday's 1-week low in the silver price, in contrast, saw investor demand for the iShares Silver Trust (NYSEArca:SLV) retreat for the first time since last Wednesday, shrinking the quantity of bullion needed to back the ETF's shares in issue by 0.4% to 9,672 tonnes – a 3.5-year low when first reached late last month.
Silver prices moved in a tight 10-cent range in London on Thursday, holding more than 4% below last week's sudden 4-month high at $15.95 per ounce.
"Safe-haven demand appears to be where people are focused," Bloomberg quotes Jacob Klein, CEO of Australian gold miner Evolution (ASX:CAH) – which today reported record half-year output up 71% – "and that [signals] a loss of faith in central banks being able to manage through this period."
"[Gold investing is] certainly getting more attention from people who have generally been bears over the past few years."
Negative interest rates are "a dangerous experiment" warn analysts at US investment bank Morgan Stanley, pointing to a likely 5-10% erosion of Eurozone banking sector profits as a result of the sub-zero rates now being imposed on commercial deposits at the European Central Bank.
"Having been long-standing gold bears we have now turned bullish," said Dutch bank ABN Amro's precious and FX analyst Georgette Boele in a note Wednesday.
"The change in our macro, central banks and FX views [mean] we expect gold prices to rally to $1300 per ounce."
Now averaging $1130 per ounce in 2016 to date, the gold price is currently 2.5% ahead of the average 2016 forecast from professional analysts competing in this year's survey by the London Bullion Market Association.
The 2016 peak price forecast by 24 of those 31 analysts has already been beaten by last Thursday's sudden 12-month high at $1261.
Evolution's share price today slipped 4.5% following its July-December 2015 results, but held more than 125% higher from this time last year.
Australia's gold mining sector as a whole edged higher, pushing its rally from late 2014's lows to almost 95%. 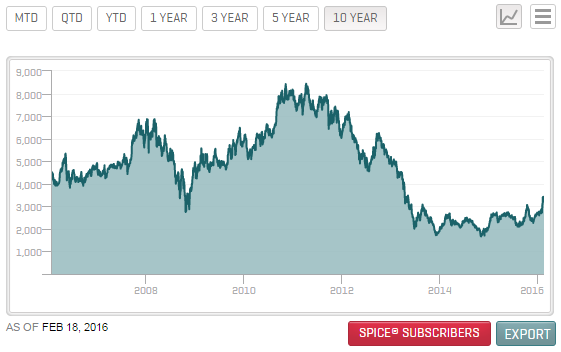 Also helped by falling costs thanks to local currency weakness against the US Dollar, South Africa's JSE Gold Index of mining stocks has now risen 150% from last August's 14-year bottom.