END_OF_DOCUMENT_TOKEN_TO_BE_REPLACED

GOLD BULLION held flat in dull summer-time trade again in London on Tuesday, moving in a tight 0.3% range either side of $1333 per ounce as world stockmarkets extended their gains of the last month.
Silver also held flat just above 2-week lows, priced at $19.60 in wholesale bullion trade as base metals slipped and European government bond prices eased back, nudging yields higher.
Platinum traded 2% below last week's new 12-month high, holding 38% higher from January's 7-year lows.
"Nothing to really report in way of flows today," said the Asian trading desk of Swiss bullion refiner MKS overnight, noting only "light Asian demand."
"[Monday was] an extraordinarily dull day in precious world, as gold could barely muster a $9 range all day," says a note from London broker David Govett at Marex Spectron.
"Let us hope business can pick up a bit, but I fear we may be in for a period of lacklustre [summer] trading."
Longer-term, "Liquidity has dropped in London to an extent that is unhealthy," news and data provider Bloomberg quotes Aram Shishmanian, chief executive of mining-backed market development organization the World Gold Council, "and to revive it is crucially important."
The center of wholesale bullion trading worldwide, London's market is primarily "over the counter", with each buyer and seller contracting and settling their deals privately between them, rather than through exchange-traded contracts.
With support from 5 banks and 1 proprietary trading house, the World Gold Council today announced its intention to launch new spot, futures and options contracts for gold sometime in the first half of 2017, traded on and cleared by base-metal exchange the London Metal Exchange.
Now part of the Hong Kong-listed HKEX Group (HKG:0388), the 140-year old LME says it cleared contracts worth $12 trillion of total notional value in 2015.
Gold transfers made between the 6 member banks of London Precious Metals Clearing Ltd (LPMCL) averaged $25 billion per day in June, according to data reported to trade body the London Bullion Market Association – 20% ahead of the 2015 average, and 6% ahead of the last 10 years' average of $23.5bn. 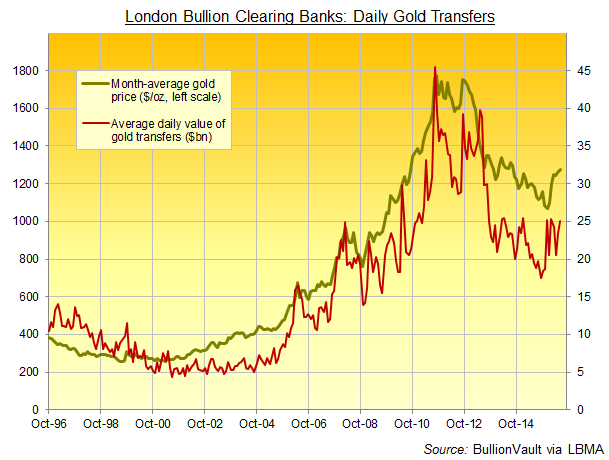 Those figures only capture gold settlements made in London by the 6 clearing banks – Barclays, HSBC, ICBC Standard Bank, J.P.Morgan, Scotiabank and UBS.
Analyst estimates say that figure can be multiplied by 3-5 times to approach the true loco-London daily volume.
Part of the largest banking group in the world, Chinese-owned London bullion clearer ICBC Standard Bank is also supporting the World Gold Council's new LME initiative, alongside US investment banks Goldman Sachs and Morgan Stanley, French investment banks Natixis and Societe Generale, and privately-owned proprietary trading firm OSTC.
"[This] is not replacing what there is already, it is an addition to," says LME chief executive Garry Jones of the new LMEprecious platform, with the proposal coming after "an extended process of engagement with major market participants and users."
"It will strengthen London's position in the global gold market," agrees Shishmanian, "enabling it to meet the needs of all participants, attract new players and satisfy the highest standards of regulatory compliance."
"A joint venture between the LME and the bullion market to create a gold futures exchange in London was [previously] formed" in the early 1980s, recalls former LME chairman John Wolff in the latest edition of the LBMA's Alchemist magazine.
"Unfortunately, it was short-lived [as] the gold futures market on Comex [in the US] was already well established. It is very difficult to create a second market trading the same thing if the first one is already successful.
"Clients want to trade where the liquidity is."
Notional volume in Comex gold contracts totaled over 130,000 tonnes in 2015 according to specialist consultancy Metals Focus.
LBMA data, which include forward and options contracts for miners and other market users wanting to hedge prices, suggest London's clearing members settled 122,000 tonnes between them last year.
Global gold-mining output rose to a record 3,211 tonnes in 2015.
"In retrospect, we...got a bit carried away," said former LBMA chair Robert Guy – like Wolff, one of the original founders of the LBMA in 1987 – in a 2012 interview.
"The Achilles heel...was the lack of domestic investor and speculator interest, without which no futures market can survive."
"This is the first time that anyone has taken on the issue of clearing for spot," says Jones at the LME, referring to deals made for settlement now, typically within 2 working days.
"People are already trading futures, but to trade everything together in one trading pool gives us confidence that [LMEprecious] will be success."