END_OF_DOCUMENT_TOKEN_TO_BE_REPLACED

GOLD BULLION sat tight just below last week's new 3-month highs in London trade Wednesday morning, holding near $1130 per ounce as new data showed China's world-leading gold mining output failing to rise for the first time in 16 years.
World stock markets fell yet again, but crude oil bounced from yesterday's drop below $30 per barrel.
US Treasury bond prices eased back, nudging 10-year yields up 3 points from Tuesday's new 10-month lows at 1.88%.
But Japanese government bond yields fell again as JGB prices continued to rise following last week's surprise move to negative deposit rates by the Bank of Japan.
That took the 10-year JGB yield to just 0.06% by the close of Tokyo trade.
"If you believe that the oil market will continue to fall and that China will remain in the doldrums, gold should continue to move slowly higher," says David Govett at brokerage Marex Spectron in London, pointing to continued gold investment and notably ETF trust-fund demand.
The SPDR Gold Trust (NYSEArca:GLD) needed another 4 tonnes of bullion to back its growing number of shares in issue by Tuesday's close, moving again in lockstep with spot prices. 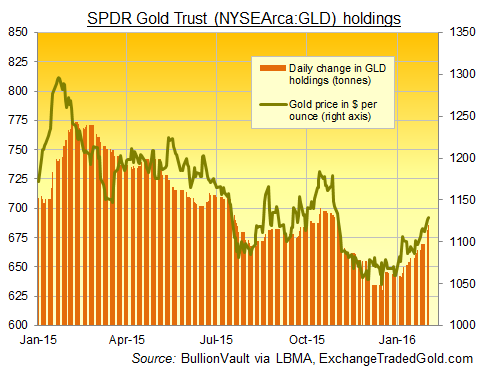 Silver's largest ETF product, in contrast, shrank once more despite a rally to $14.40 per ounce – repeated on Wednesday – with the iShares Silver Trust (NYSEArca:SLV) shedding four tonnes to a new 3-year low of 9,622 tonnes.
"Gold has probably got another $10 to $20 upside before it rolls over," counters Tom Kendall, head of precious metals strategy at Chinese-owned investment, commodities and bullion bank ICBC Standard Bank, noting how betting in the US interest-rate market now forecasts that the Fed Funds rate from the US central bank will sit below 0.6% this time in 2017.
In other words, "A Fed unable to make more than one hike this year is fully priced in," Kendall explains, adding that "Asian physical [demand] flows have started to fall and will diminish quickly over the next few days" as wholesalers finish selling to retailers ahead of the weekend's peak Chinese New Year shopping spree.
Chinese gold premiums – over and above quotes for bullion settled in London – today edged down towards $1 per ounce, less than half the average incentive offered to importers over the last 18 months.
Trading volumes on the Shanghai Gold Exchange also retreated ahead of next week's Chinese New Year holidays.
China's gold mining output meantime failed to grow in 2015, new data from government-mandated trade body the China Gold Association said today – the first such failure since 1999 according to historic data from specialist analysts Thomson Reuters GFMS.
Still the world's No.1 producer nation, China saw total gold mine output slip 0.4% from 2014's record to reach 450 tonnes, the CGA said.
Private consumption meantime – as identified by the CGA – slowed in the last three months of 2015, pulling the annual growth rate down from 7.8% during the first three quarters to just 3.7% from full-year 2014.
Chinese gold consumption slumped by one-fifth in 2014 from the record of the previous year, according to CGA data, when China's industrial, investment and jewelry gold demand leapt 41% on the spring 2013 crash in gold bullion prices worldwide.