END_OF_DOCUMENT_TOKEN_TO_BE_REPLACED

DEMAND to buy gold from central banks led bullion-market headlines on Tuesday, while the metal held near yesterday's 12-week highs versus a falling US Dollar.
World stock markets bounced from their week-long drop, but London's FTSE index held flat as UK Prime Minister Theresa May met with her Cabinet to try and rescue her "Chequers Deal" proposals for next March's Brexit – a plan rejected by the European Union as well as many of her own Conservative Party MPs.
Monday's rise in bullion prices saw investors move to buy gold exposure through ETF trust fund products, led by the third daily growth in 4 sessions for the largest such fund, the SPDR Gold Trust (NYSEArca:GLD).
Marking the GLD's most consistent run of investor inflows since March, yesterday's 4.1 tonne addition took the quantity of gold need to back GLD shares back up to end-August levels above 748 tonnes. 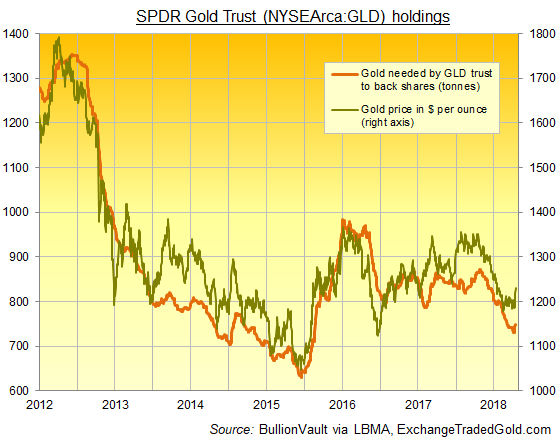 Extending the strongest run of central-bank gold buying since 2012 meantime, both Hungary and Poland added bullion to their national reserves in September, with Budapest buying 28 tonnes and Warsaw adding more than 4 tonnes to the 9 acquired over July and August.
Gyorgy Matolcsy – head of Hungary's central bank – "touted the move as a way to improve the security of the nation's wealth and a nod to Hungary's heritage as one of the world's largest gold producers in the Middle Ages," says Bloomberg, reporting the move.
The first change to Hungary's official gold reserves since it stopped selling in 1993, last month's rise matches the Magyar Nemzeti Bank's second heaviest full-year addition since the end of WWII, coming behind only the 45 tonnes bought in 1971 when the United States "closed the gold window" and ended the Dollar's convertibility into bullion.
Taking Poland's gold reserves up to what Reuters calls a "record high" of 117 from 103 tonnes since June, Warsaw's purchases this summer mark its first gold-policy change since the 75-tonne addition made when the Narodowy Bank Polski gained new powers and responsibility under the country's new constitution of 1997.
"With Hungary's gold levels below average and regional peers adding to holdings, it makes sense to maintain some kind of parity," Bloomberg quotes analyst Gergely Palffy at Austrian bank Raiffeisen in Budapest.
"The announcement will have limited impact from a market perspective."
Led by Germany, Italy and France, central banks in the Eurozone hold an average 53.9% of their foreign-currency reserves in gold bullion according to data compiled by the mining-industry's World Gold Council.
End-June calculations from the Council put gold at just 3.8% of Poland's national reserves and just 0.4% for Hungary.
"We believe [sanction risk] is one of the drivers of increased central bank gold buying from [these] new buyers," says the Council's chief market strategist John Reade, re-tweeting US investment bank Goldman Sachs' view that the Trump White House's actions against Russia have led Moscow to sell Dollar assets and buy more physical gold, highlighting the issue of political independence to other sovereign states.
Looking at the Dollar's fall from 66% to below 63% of global central-bank currency reserves since 2013, "Sanction risk appears to explain a significant portion of the observed decline," says Goldman Sachs' analyst Zach Pandl wrote.
"The Dollar's share of reserve assets could decline further if other large reserve holders were to make similar changes as the Central Bank of Russia over time."
With Russia now No.3 in the world league of gold-mining nations, Moscow has bought 70% of domestic output since EU-US sanctions over the conflict in Ukraine and annexation of Crimea began 5 years ago.
Over in the consumer sector meantime, India's household demand to buy gold ahead of next month's key Diwali festival is "robust" says the Business Standard, quoting leading retailers, despite Rupee prices hitting a 5-year high on Monday.