END_OF_DOCUMENT_TOKEN_TO_BE_REPLACED

BUY GOLD prices fell hard against all currencies Thursday as major government bond prices slipped, pushing longer-term interest rates higher, following yesterday's "no change" statement from the US Federal Reserve.
All 9 members of the Fed's Open Market Committee voted to keep both interest rates and the current level of QE bond holdings unchanged for another month.
But the accompanying statement said that the "[US] labor market has continued to strengthen even as growth in economic activity slowed...[itself] likely to be transitory."
Betting on a June rate hike jumped according to data from futures exchange the CME, while commodity prices sank, knocking 2% off US crude oil and driving silver prices to their lowest since early January at $16.40 per ounce – over 12% below the 5-month peak of mid-April.
Demand to buy gold coins and small bars for investment saw its strongest first-quarter since 2013 in January-to-March according to new data from mining-backed market development organization the World Gold Council today.
"Jewellery demand is still in the doldrums" however, the WGC said, while central-bank gold buying fell to its lowest in nearly 6 years thanks to a pause in purchases by the People's Bank of China, formerly the strongest official-sector buyer alongside Russia. 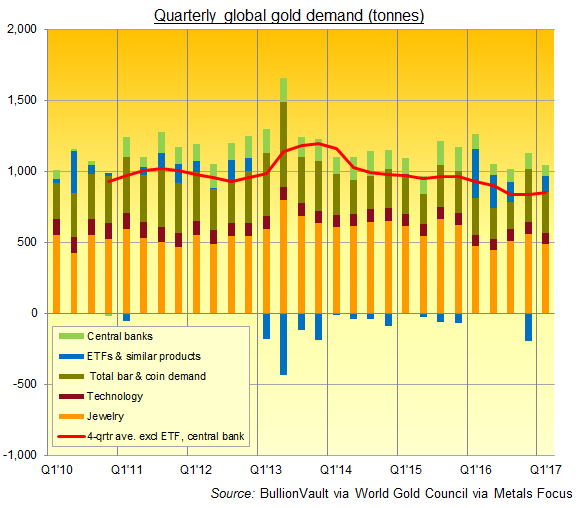 Barring the second quarter of 2015 and the first 3 quarters of 2016, consumer demand to buy physical gold was the lowest since spring 2010 on the WGC's data.
"[Total] demand is down year-on-year," says the World Gold Council's head of market intelligence Alistair Hewitt, pointing to " Q1 last year [being] exceptionally high [on] record-breaking surges in ETF inflows."
Exchange-traded trust funds again saw "strong interest from European investors [in Q1 2017] ahead of the Dutch and French elections," says Hewitt.
"Retail investment demand is strong too, up 9% year-on-year," he adds, with gold bar and coin buying in No.1 consumer market China some 30% higher to breach 100 tonnes "for only the fourth [quarter] on record...fuelled by concerns over potential currency weakness and a frothy property market."
Western gold investing demand has retreated since Q1 ended, with both the US and Perth Mints reporting multi-year lows in coin sales during April, while users of online leader BullionVault ending their strongest run of positive net gold investing in five years with a small net liquidation across last month as a whole.
World stock markets rose Thursday, shrugging off Wall Street's late drop after the Fed released its "no change" statement.
Having risen in mid-April to touch its 6-year downtrend – now at $1290 per ounce – the gold price in Dollars today fell 4.5% below that level, dropping beneath $1230 for the first time in 6 weeks and losing over $20 from just before yesterday's Fed decision.
Prices to buy gold with Euros meantime fell to 7-week lows. Wholesale bullion reached its lowest since start-February in terms of the British Pound.
Even before the Fed's comment Wednesday, "The metal dropped to a 4-week low on Dollar strength following better-than-expected ADP National Employment and ISM Non-Manufacturing PMI data," says a note from bullion market-making bank Scotia Mocatta's New York team.