END_OF_DOCUMENT_TOKEN_TO_BE_REPLACED

BUY GOLD prices jumped to 2-month highs in Asian and London trade Thursday, gaining over 4% for 2016 so far as China's stockmarket plunged for the second time in 3 days following a new 5-year low in the Yuan's exchange rate to the Dollar.
Chinese regulators shut the stock market after just 29 minutes trade as the plunge in equities triggered the 7% limit-down circuit breaker imposed during last summer's turmoil.
Another "stability" measure imposed during mid-2015's crash, blocking large shareholders from selling their stock, is due to expire Friday.
Prices to buy gold in Shanghai rose 1.7% against the falling Yuan on the strongest trading volume since August, with premiums over comparable London quotes – the wholesale benchmark for physical delivery – rising to $4 per ounce.
That was some 60% stronger than the average incentive offered to Chinese gold importers of the last 12 months.
With prices to buy gold touching $1100 for the first time in 9 weeks overnight, the current market turmoil "reminds me of the crisis we had in 2008," Bloomberg quotes billionaire former hedge-fund manager George Soros, speaking overnight at a forum in Colombo, Sri Lanka.
"George Soros's record is sufficiently impressive," says Economist columnist Phillip Coggan, "that it is worth taking notice when he sounds the alarm.
"[But] if there is a crisis, 1998 is a better parallel," he writes on his Buttonwood blog, pointing to the late 1990s' emerging-markets crash.
"The credit cycle looks way more like the '90s than it does the 2000s," agrees Bloomberg TV anchor Joe Weisenthal, citing how the gap between US Treasury bond yields and lower-grade credit yields is currently much smaller than going into the late 2008 crisis.
After correctly forecasting 2015's average gold price down to the dollar, Natixis' analyst Bernard Dahdah now sees gold falling sub-$1000 by April as prices "will be mainly driven by the expected path of interest rate hikes" from the US Federal Reserve.
"In our view," counters a new 2015 review from mining-backed market-development organization the World Gold Council, "the effect that US rates have had on the gold price is overdone and may take a back seat this year."
Canada's RBC bank also forecasts that the Fed will stay "low and slow", and believes "this has been discounted into a $1100 price", with 2016 demand to buy gold holding it above last month's new 7-year lows around $1050 per ounce.
New York-based metals consultancy CPM Group in contrast expects gold to end 2016 below $1000 per ounce.
Shorter-term, the current "risk off" turn in global financial markets "may see the yellow metal push towards $1115 [today]," says a trading note from the Asian desk of Swiss refining and finance group MKS, "with support sitting towards $1090-85."
Wednesday's gold price rise saw both the largest gold and largest silver ETFs shrink as investors liquidated shares.
Rather than expanding as more investors buy, the iShares Silver Trust (NYSEArca:SLV) has now dropped 4 tonnes since the New Year, retreating to its smallest backing by weight since mid-November at 9,884 tonnes.
The giant SPDR Gold Trust (NYSEArca:GLD) meantime lost 1.4 tonnes on Wednesday despite gold prices rising 1.3%, shrinking below 641 tonnes – a new 7-year low when first reached at the start of December. 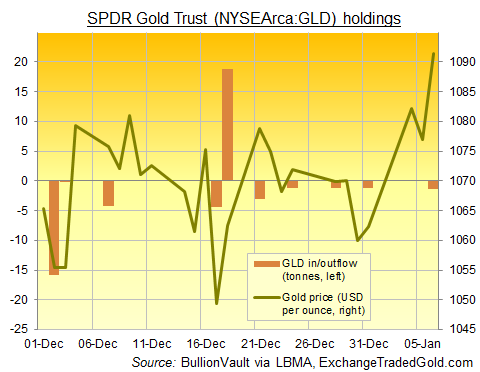 Industrial commodities today lost another 1.3% on top of Wednesday's worse-than-2% drop, with US crude oil contracts sinking almost 4% as the start of New York trade approached.
Silver mapped today's moves in the gold price, but  failed to repeat its gains once more, adding only 1.6% from the weekend to re-touch $14.08 and driving the Gold/Silver Ratio of relative prices up near 79, approaching the 7-year highs of gold's relative value set in late 2015.
Major government bond prices rose everywhere, pushing US Treasury yields lower again and driving the 10-year yield 0.11 percentage points beneath where it stood this time a month ago, before the US Fed finally raised its key overnight rate from 0% for the first time since 2008.