END_OF_DOCUMENT_TOKEN_TO_BE_REPLACED

GOLD PRICES retreated towards last week's near-6 year lows in London trade Wednesday, unmoved by worsening tensions between Turkey and Russia over Syria as bond prices slipped ahead of next month's interest-rate decision from the US Federal Reserve.
Global trade body the London Bullion Market Association today reported a "strong, positive response" on Wednesday to its request for proposals from trading exchanges, technology firms, brokers and data vendors aimed at aiding growth, lower costs and boosting liquidity in the wholesale gold business.
Wednesday afternoon's run of the LBMA Gold Price auction – the 100-year old benchmarking process now formally regulated by UK authorities and administered by exchange-providers ICE – saw demand and supply volumes of just over half the third-quarter average.
Formerly known as the "Fix", the process cleared at a price of $1068 per ounce – only 25 cents above last Wednesday's new 69-month low. 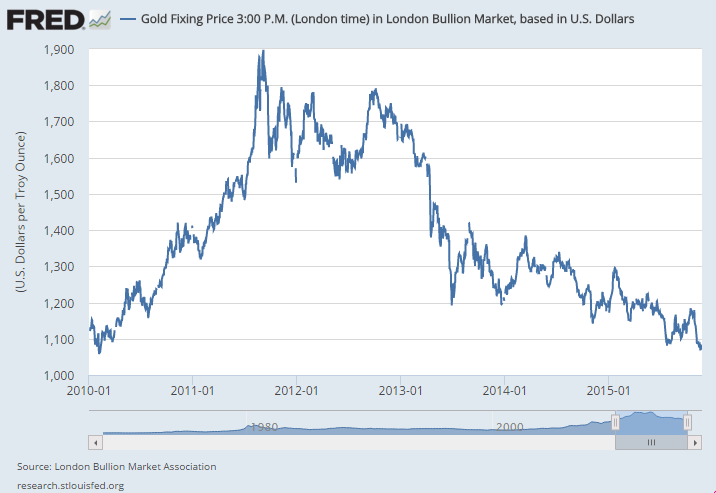 With the Kremlin meantime confirming the death of one pilot but the safe return of the other from Tuesday's downing of a Russian fighter jet by Turkey, Moscow today deployed "one of its largest air defense ships at the foot of Turkish territorial waters in the Mediterranean," Turkey's Hurriyet newspaper reported online.
France's Institute of Statistics & Economic Studies said today that consumer confidence had held stable ahead of the Paris terror attacks this month.
"Following the headlines that Turkey had shot down a Russian jet," notes Swiss refining and finance group MKS, "gold finished higher for only the second time this month.
Trading volumes are now "likely to reduce significantly," it adds, because of Thursday's US Thanksgiving holiday.
"A more pronounced price rise," says German investment, retail and bullion-dealing bank Commerzbank, "is being blocked by the growing expectation of a December rate hike by the US Federal Reserve."
Interest-rates betting in the futures market now puts the likelihood of a Fed rate rise next in December – the first move from 0-0.25% in 7 years – at 75%.
The European Central Bank, in contrast, will expand its QE bond buying and cut its Euro deposit rate further below zero when it meets next month, according to a poll of more than 50 economists by Reuters.
"Any interest rate move [by the Fed] has been so effectively telegraphed that it should already be priced into the gold market," says George Milling-Stanley, gold investment strategist at State Street Global Advisors, the marketing agents for the giant SPDR Gold Trust (NYSEArca:GLD).
"The internal market fundamentals...have begun to reassert themselves [after] the bubble that developed in gold prices in 2011 and [its] subsequent bursting in 2012 and early 2013.
"There is good support at the bottom end of the trading range [at $1050]."
Once the world's largest exchange-traded trust fund at its peak in 2011, the GLD ETF ended Tuesday with the number of shares outstanding at a 7-year low, needing 655 tonnes of gold bullion in backing – the smallest quantity since Lehman Brothers collapsed in September 2008.