END_OF_DOCUMENT_TOKEN_TO_BE_REPLACED

GOLD PRICES slipped Monday lunchtime in London as European stock markets held a small gain, shrugging off another day of equity losses in Asia as a busy week began for trade, sanctions and monetary politics, writes Atsuko Whitehouse at BullionVault.
Even as the US Dollar index retreated from last week's 17-month high against a basket of other currencies, spot gold prices fell 0.4% from Friday night's close to trade below $1229 per ounce.
"We are seeing increasing weariness that the US Dollar could run out of steam, which naturally plays into gold," reckons Stephen Innes, APAC trading head at spread-betting bookmakers Oanda in Singapore.
"If we get a little bit of escalation of US political risk that plays even more favourably into gold."
Ahead of tomorrow's key US mid-term elections, political pundit Nate Silver now puts a 1-in-7 shot on the Democrats winning the Senate, with a 1-in-7 shot on the Republicans holding the House of Representatives.
Lambasted by President Trump for raising interest rates, the Federal Reserve then meets to announce its latest policy on Thursday.
Trump's White House today re-introduced sanctions against No.5 oil exporter Iran over its nuclear research program, but gave some of America's closest allies exemptions that will allow Tehran's biggest customers – mostly in Asia – to continue buying its crude for now.
US oil prices fell Monday, down below $63 per barrel.
Hedge funds and other money managers last week increased their bearish position in Comex gold futures and options by 69%, up to the notional equivalent of 141 tonnes – the highest in three weeks – according to US regulator the CFTC. 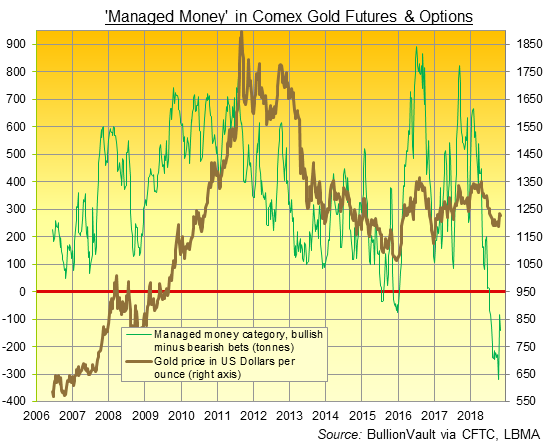 Holdings in SPDR Gold Trust (NYSEArca: GLD), the world's largest gold-backed exchange-traded fund, meantime fell 1.8 tonnes on Friday's small price drop.
Ending the week needing 759 tonnes however to back its shares, the GLD recorded its 4th weekly growth and its 1st calendar month increase since April.
"We expect US-China trade tensions to get worse before they get better," analysts at US financial giant Citi meantime say in a note after China's President Xi Jinping hit back President Donald Trump's "America First" policies, denouncing 'law of the jungle' and "beggar-thy-neighbour" trade practices.
The Shanghai Composite stock index declined 0.4% on Monday and Hong Kong lost over 2.0% as Japan's Nikkei 225 stock index lost 1.6% and South Korea's export-heavy Kospi index fell 0.91%.
"Equity markets do not seem to be fully incorporating the risks of an escalation of tensions yet," says Citi, "which could have an effect on investment, sentiment, inflation, and growth."
Eurozone finance ministers are today set to discuss Italy as the bloc waits for Rome to respond to the unprecedented rebuke it received from Brussels two weeks ago, telling the left-right coalition to revise its 2019 deficit spending plans by 13 November.
"[But] if the recipe works here, it will be said at a European level: 'We should apply the recipe of Italy to all other countries'," says anti-establishment deputy prime minister Luigi Di Maio to the Financial Times.
The Euro today slipped 0.2% vs the Dollar, helping keep gold prices for European investors above €1080 per ounce.
On the Brexit front, the London government today dismissed as "speculation" reports in The Sunday Times that an all-UK customs deal to remain within EU rules is being prepared with Brussels as a solution to the Irish border problem.
As Sterling rose Monday, the UK gold price in Pounds per ounce slipped 0.5% to £945.