END_OF_DOCUMENT_TOKEN_TO_BE_REPLACED

GOLD PRICES dropped $5 per ounce on news of stronger-than-expected US jobs growth on Friday, heading for the first weekly drop in 5 as world stock markets extended their bounce from October's slump.
Japan's Topix index closed 3.9% higher from last Friday and Shanghai's CSI300 added 3.7% after falling Monday back near October's 28-month low for Chinese equities.
European stock markets then rose for the 5th day running, and Wall Street pointed higher as US non-farm payrolls blew past analyst forecasts, with the Bureau of Labor Statistics estimating jobs growth of 250,000 in October.
Average US earnings growth also rose, accelerating to 3.1% per annum – the fastest pace in 9.5 years. 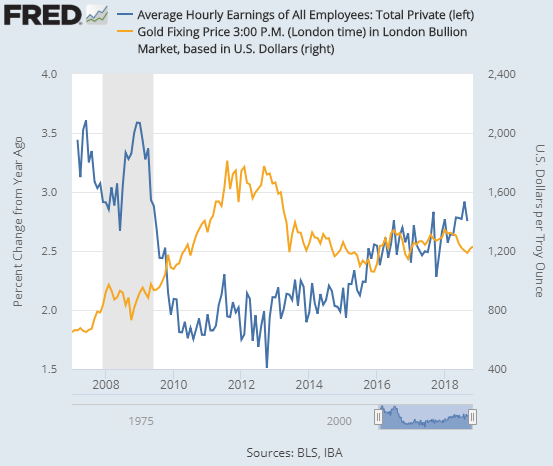 Major government bond prices fell Friday, edging interest rates higher, and crude oil fell near $63 per barrel of US benchmark grade WTI, back down to April levels.
With gold prices holding above $1231, silver in contrast rose to $14.81 per ounce, topping its trading range since end-August and rising 3.9% from Wednesday's low.
After new global gold demand data yesterday said the first 9 months of 2018 were the weakest since at least 2009 – totalling below 3,000 tonnes despite a rise in central-bank buying – "The balance of this quarter may prove a healthy turnaround," reckons Canadian bank RBC's analyst Christopher Louney, pointing to October's 20-tonne rise in gold-backed ETF trust fund investment.
"If physical demand strength can persist in any reasonable amount, Q4 could shape up to be a healthy quarter in line with our price forecasts."
Over in No.2 consumer nation India however, "Diwali is just a week away but there is no improvement in demand," Reuters today quotes Mumbai wholesaler Ashok Jain at Chenaji Narsinghji.
"Retail buyers are not interested in making purchases at the current price level" – now near 6-year highs in Rupee terms as demand around the Hindu festival calendar peaks.
A steep rise to 3-week highs in the Yuan versus the Dollar this morning saw Shanghai gold prices close the week at a premium to London quotes of $5 per ounce, one third below the typical incentive for new imports into China and suggesting domestic supplies are sufficient to meet domestic demand in gold's No.1 consumer market.
Major coin and bar fabricator the Perth Mint in Australia says its global sales of retail gold investment coins and bars fell by two-fifths last month, back in line with the last 3 years' monthly average of 1.1 tonnes after hitting a 20-month high on September's price drop.
"Although [India's] largest gold-buying festival has been weaker than normal," says analyst Suki Cooper of investment bank Standard Chartered, "e xternal factors remain key and gold investors are likely to focus on macro events [including] the FOMC meeting and the US mid-term elections" coming next week.
"If President Trump loses support and the USD weakens, retail investment demand is likely to pick up, providing a more solid floor for prices, and potentially a tailwind."
The gold price in Euros also struggled Friday to extend its 6-week rally, trading just shy of last week's finish at €1080 per ounce as officials from the European Commission got set for a showdown Monday with Rome's left-right wing coalition over Italy's planned 2019 budget deficit.
The UK gold price in British Pounds per ounce meantime fell back below £950, down 1.5% from last Friday's finish – the highest weekly close for UK investors since mid-June – as UK and European Union negotiators were reported to be preparing a compromise over the post-Brexit border between Northern Ireland the southern Republic.