END_OF_DOCUMENT_TOKEN_TO_BE_REPLACED

GOLD PRICES recovered the last of late-May's 4% drop versus the Dollar in London on Wednesday, breaking above what technical analysts called "resistance" at $1252 per ounce as the European Central Bank began a new phase of QE monetary stimulus across the world's largest single economic bloc.
Global stock markets struggled to hold yesterday's sharp gains after new trade data showed China's exports falling faster in May, down 4.1% per year.
But prices to buy government bonds, corporate debt, commodities and precious metals all rose, as did the Euro currency.
Running monetary policy for the 330 million citizens of the 19-nation Euro currency union, the ECB today began buying debt issued by "investment grade" corporations including the world's largest brewer Anheuser-Busch InBev (EBR:ABI), Spain's near-monopoly communications provider Telefonica (BME:TEF), Italy's No.1 insurance firm Assicurazioni Generali (BIT:G, +1.9%),  France's Renault automaker (EPA:RNO) and Europe's largest engineer, Germany's Siemens (ETR:SIE) according to "sources" quoted by the media.
Now diverting some of its €80 billion per month of QE bond purchases from government debt to buying investment-grade corporate debt, "The central bank has [already] bought more than €800 billion of government bonds since March 2015," says Bloomberg News.
Borrowing costs for investment-grade Eurozone corporations today fell below 1% as bond prices rose head of the ECB purchases on average.
So-called "junk bonds" issued by Euro businesses ranked below investment grade – and paying a higher yield in return – have already tripled investors' money since the depths of the global credit crunch in late 2008. 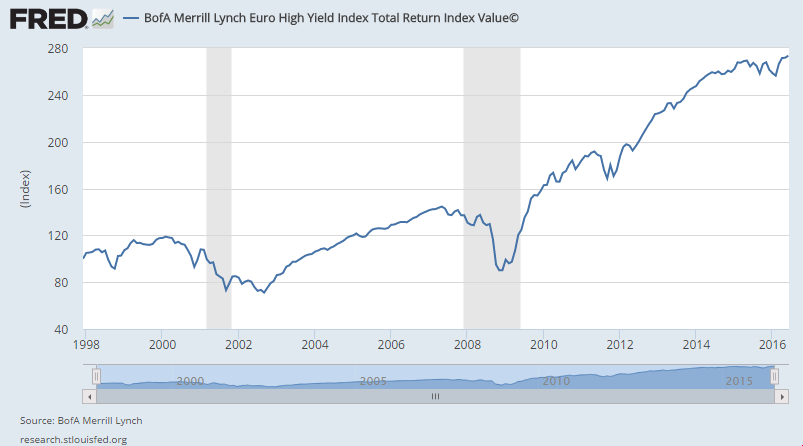 "Ten-year German [government] Bund yields are hovering just above the zero level," noted forex strategist Steven Barrow at the Chinese-owned ICBC Standard Bank overnight – "the third time they have been here and...it could be third time lucky."
"However," adds his colleague Tom Kendall at ICBC Standard's commodities team, "US 10-year yields are also dropping in reaction to [last Friday's] weak jobs data and decline in benchmark rate expectations."
US consumer credit grew at its slowest April pace since 2013, new data showed Tuesday, missing Wall Street forecasts by 25%.
"A simultaneous fall in US and European yields," says Kendall, "should be unequivocally good for gold," switching his view from near-term bearish.
ICBC Standard's precious metals strategist now believes prices to buy gold "should be able to test the [May] 2015 high of $1308 again...[with] the next technical targets [at] $1333 then $1392."
"A rebound is developing," agreed a technical analysis Tuesday from ICBC's fellow London bullion market-maker Societe Generale, saying that "a move above gold's weekly [simple moving average] at $1251 would extend recovery towards $1264-1280."
Wednesday morning's rise to $1254 also broke what bullion market maker Scotia Mocatta's technical note last night called "resistance at $1252...the 50% Fibo level of the May [gold price] decline."