END_OF_DOCUMENT_TOKEN_TO_BE_REPLACED

GOLD PRICES edged higher against a weakening US Dollar in Asian and London hours on Thursday, rising 1.8% from last week's finish as world stock markets held unchanged in quiet trade.
Major government bonds held also flat overall, as did commodities.
Silver edged up towards $15 per ounce for the third day this week.
Gold's rally, says a note from Dutch bank ABN Amro, has " pushed aside headwinds such as...a higher probability of a Fed rate hike in June, and a rebound in the US Dollar, highlighting the strong upward momentum in gold prices."
Gold prices first reached today's US Dollar peak of $1245 per ounce 3 weeks ago, trading in a tightening range since then.
ABN that day called gold's price movement a "change in trend", switching its outlook to bullish the following week having been "long-standing bears".
"The momentum for gold ETFs continues to underpin the spot price," says refining and finance group MKS, "[and] with fresh inflows yesterday...the influx [is] not looking to slow anytime soon."
Rising for the 3rd session running on Wednesday, shares in bullion-tracker the SPDR Gold Trust (NYSEArca:GLD) saw investor demand expand once more, taking the quantity of gold needed to back the ETF's stock to the largest level since September 2014 at 788 tonnes – a 5-year low when reached in April that year. 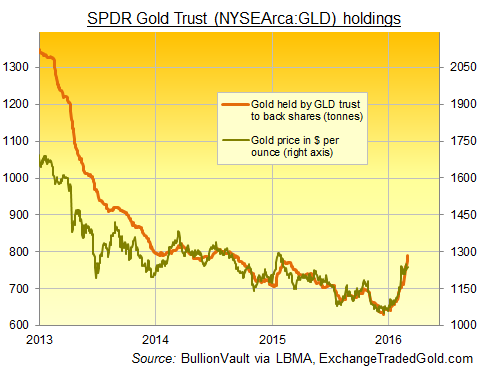 The largest silver-backed trust fund also saw demand for its stock grow Wednesday, but against falling prices, with silver recording a 1-month low at Wednesday's benchmarking auction in London of $14.82 per ounce.
The quantity of bullion needed to back the iShares' Silver Trust (NYSEArca:SLV) yesterday reached its largest level in 8 weeks at 9,777 tonnes.
Meantime in India – the largest household-consumer market for gold – jewelry and bullion outlets "are shuttered," reports Bloomberg from Mumbai, with retailers and manufacturers striking in protest at Monday's announcement of gold tax and duty hikes in the 2016 Budget.
A nation-wide strike in 2012 "was successful", Bloomberg says, in preventing the then-government from imposing an excise duty at the point of sale.
But the current BJP administration of Narendra Modi – elected in 2014 on a pro-business platform – has now imposed a 1% levy, and "[won't] be in a hurry to roll back the excise tax as it will be blocking a source of revenue," the newswire quotes brokerage Inditrade's head of FX and commodities Harish Galipelli in Hyderabad.
Indian gold prices last week fell as low as a $50 per ounce discount to international quotes, thanks to a glut of imported metal and a lack of demand ahead of the Budget, which had been expected to reduce duty, not raise it.
Gold prices in China meantime reversed most of yesterday's 0.9% drop on the Shanghai Gold Exchange, nearing 12-month highs against the Yuan but cutting the premium above international Dollar quotes below 30 cents per ounce – just one-eighth of the incentive typically offered to Chinese importers.
Trading volumes in Shanghai's main gold contract slipped to a 6-session low, but held two-thirds stronger than the daily average of the last 18 months.
Gold priced in Euros today held around €1140 per ounce – the new 10-month high reached on Monday – as the single currency edged higher versus the Dollar following stronger-than-expected retail sales data for the 19-nation monetary union plus a rise in jobless benefit claims reported by the US.