END_OF_DOCUMENT_TOKEN_TO_BE_REPLACED

GOLD PRICES edged back up to last week's closing level in London trade Wednesday, recovering to $1557 as European stock markets failed to follow Asia higher amid the fast-spreading outbreak of coronavirus.
Already killing 17 and infecting 440 people in China, the coronavirus outbreak "is threatening to wreak havoc on Lunar New Year travel plans," says the South China Morning Post, "at a time when many Chinese people journey to their hometowns for family reunions."
Those reunions, plus the wider 500-year tradition of gift-giving, also help make Chinese New Year now the heaviest single gold-buying festival in the world.
Tech giant Tencent – provider of the WeChat social app, with its popular gold-gifting function – says its founder, Pony Ma, will not be meeting staff at the company's Shenzhen HQ this weekend to hand out traditional New Year 'red envelopes' of cash, the first cancellation in nearly 2 decades for the firm.
Staff waited in line  for up to 12 hours last Lunar New Year to shake hands with 4 different executives and receive around $30, according to InkstoneNews.
Wall Street yesterday snapped a 5-day rise to new all-time highs as news broke of the first confirmed US case of the potentially deadly respiratory virus.
With just 2 days until the Chinese New Year, the stock market in China today rallied from 3 week lows, adding 0.4% to the Shanghai-Shenzhen CSI300 share index.
China's Yuan today held flat on the FX market after slumping back near the 7 per US Dollar level – its best in 7 months when recovered on last week's 'phase one' US-China trade deal – after President Xi urged the Chinese people to make stemming the outbreak a priority. 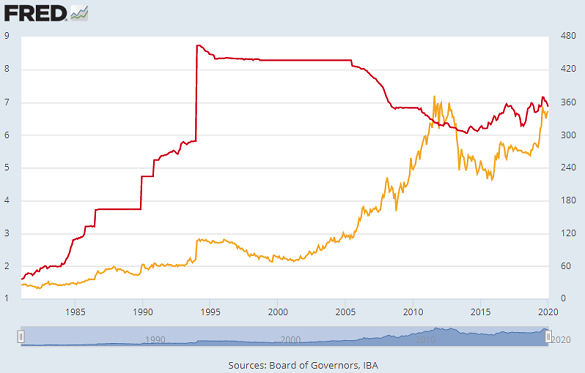 "[Household] gold demand is picking up," says Rhona O'Connell, head of market analysis for Europe and Asia at brokerage INTL FC Stone, "but local premia are still relatively low, reflecting the hesitancy in the market."
Premiums for wholesale gold in Shanghai, over and above London quotes, today fell to $5 per ounce – some 40% below the average incentive for new imports to the metal's No.1 consumer market.
The only legal route for gold bullion into China, the Shanghai Gold Exchange will be closed for a week starting Thursday night.
"Weaker physical offtake will not be a strong headwind [for global prices] if the backdrop remains conducive to investment demand," says Australasian bank ANZ.
"Despite some near-term optimism on equities and economic conditions," says a note from Swiss bank and wealth management group Credit Suisse, "we generally expect a risk-off skew in 2020" thanks to the US-China trade war, the UK's exit from the European Union, and continued worries over a global economic slowdown.
"This uncertainty is leading to most central banks around the world cutting rates, which is supportive of gold prices."
"[But] gold would appear to be pricing in all its tailwinds at present," says O'Connell at INTL, also contrasting weak Chinese New Year demand with "supportive" news for gold investment, such as US President Trump nominating 'dovish' candidates to join the US Federal Reserve, plus his ongoing impeachment trial.
"We are still seeing plenty of buying interest below $1550 and the market rebounded quickly," says a trading note from Swiss refining and finance group MKS Pamp.
Silver in contract "faced a heavy sell off" on Tuesday, with the grey metal sinking 40 cents from last weekend's level before bouncing higher off $17.64 per ounce.
Platinum prices also rallied today from a sell-off Tuesday, finding a floor at $991 – the lowest in nearly a week – before rising Wednesday to $1008 per ounce.
That was still more than 3% below Friday's spike to 2-year highs.
Sister metal palladium also recovered some of yesterday's drop, but held almost $100 per ounce below Monday's new all-time record top above $2,530 per ounce – a rise of 30% for 2020 so far.
"Material is very hard to come by in Zurich in particular," says INTL's O'Connell of the major trading center, "while industrial demand remains relentless.
"Much of the material is going into China, we suspect [in] part due to the fact that the emission control standards tighten again in 2023" – most likely meaning new gasoline autos will need more palladium in their catalysts, fitted to cut harmful emissions and accounting for 80% of palladium demand each year worldwide.
Wall Street yesterday snapped a 5-day rise to new all-time highs as news broke of the first confirmed US case of the potentially deadly respiratory virus.
With just 2 days until the Chinese New Year, the stock market in China today rallied from 3 week lows, adding 0.4% to the Shanghai-Shenzhen CSI300 share index.