END_OF_DOCUMENT_TOKEN_TO_BE_REPLACED

GOLD PRICES slipped for the 4th day running in London on Thursday, dipping through $1850 per ounce as the US Dollar rose, inflation expectations fell, and world stock markets extended yesterday's plunge in New York.
Pulling the Dow Jones index into negative territory from this time a year ago, Wednesday's 2% drop in US equities came as what Bloomberg calls "a parade of Federal Reserve officials" called on the White House and Congress to agree new fiscal stimulus in the face of this winter's likely surge in Covid-19 infections and social restrictions.
New infections hit a fresh daily record yesterday in the Netherlands – where younger celebrities are leading a backlash against social restrictions with the hashtag 'I no longer participate' – while officials in France's 2nd city of Marseilles asked for 10 days delay to shutting all its bars as ordered, and the mayor of Paris said she finds the government's new 10pm closing rule "difficult to understand".
Euro gold prices today steadied at €1590 – like the US Dollar price, now 10% below August's fresh all-time highs
Fewer than 2-in-5 respondents to a US poll meantime say they want to get a Coronavirus vaccine as soon as it becomes available, while last week's new and continuing claims for US jobless benefits both came in above analyst forecasts today.
"We have done basically all of the things that we can think of," said US Fed chair Jerome Powell in testimony about the central bank's Main Street Lending Program to Congress yesterday.
The US economy remains in a "deep hole" said vice-chair Richard Clarida, also calling for more debt-funded stimulus and adding that the Fed "are not even going to begin thinking" about raising interest rates from 0% until inflation reaches its now abandoned 2%-per-year target.
Inflation forecasts from bond-market prices fell again on Thursday, dropping to the lowest since 4th August at 1.59% while 10-year interest rates Treasury debt slipped but held  15 basis points higher from then.
Together that put the real rate of interest at its least negative since gold prices reached $1900 per ounce in late July. 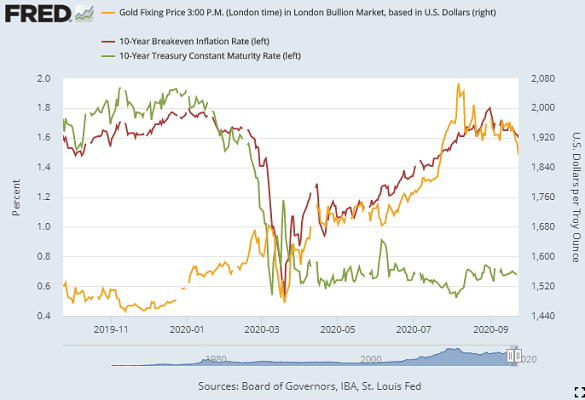 The UK gold price in Pounds per ounce meantime slipped to 3-week lows beneath £1460 on Thursaday as Sterling stabilized at 2-month lows on the currency market after finance minister Rishi Sunak – having subsidized restaurant meals with £400m of tax-funded aid ($525m) in August – announced a new jobs support scheme to counter the economic impact of the new Covid laws imposed by his Conservative Government from today amid a surge in cases.
Nearly 3 million workers, some 12% of the UK workforce, are currently relying on the current 'furlough' scheme for some or all of their income. Set to end next month, it has cost £39.3bn to date ($51.4bn).

Road haulage operators meantime "ridiculed" the Boris Johnson Government's plan to demand lorry drivers get special permits for entering the south-eastern county of Kent from 1st January – the day the UK finally leaves the European Union more than 4 years since the Brexit referendum – to control the massive traffic jams expected as the port of Dover and also Calais in France impose new customs checks thanks to the failure to reach any UK-EU deal on trade.
Silver prices today steadied at $22.00 per ounce, a 6-year high when first reached in July but down more than 26% from early August's peak after the giant SLV silver-backed ETF trust fund saw another day of investor liquidation.