END_OF_DOCUMENT_TOKEN_TO_BE_REPLACED

GOLD PRICES rose to new 1-month highs against a rising US Dollar Wednesday morning in London, touching $1088 per ounce as Western stock markets fell again, crude oil hit fresh 11-year lows, and the Chinese Yuan dropped to its lowest Dollar value since 2010.
After the Thomson/Reuters CRB measure of commodity prices lost 26% in 2015 – its 5th annual decline in a row – the index of 19 natural resources extended its drop for the first 3 days of 2016 to 1.7% as Brent crude fell below $35 per barrel for the first time since 2004.
Ten-year US Treasury yields edged down as bond prices rose, hitting a 3-week low at 2.19%.
New York stock markets pointed to a sharply lower opening as Europe's major equity indices fell 1.9%.
Gold priced in Euros hit 5-week highs, and priced in British Pounds gold hit its highest levels since October at £740 per ounce.
"Short-term volatility of the Yuan is understandable as 'hot money' makes an exit out of China," says a 'China Voice' column from government news agency Xinhua, also citing the US Fed's interest-rate hike from 0% in December.
"However, there is no risk for the Yuan to see substantial depreciation in the long term."
China's Yuan today fell to a new 5-year low on the FX market – beneath where it traded when Beijing first allowed 'offshore' Yuan dealing – after the People's Bank set its onshore exchange rate lower against the Dollar.
"Physical [gold] demand is reasonable across much of Asia," says a note from investment and bullion bank ICBC Standard Bank, "although the Shanghai arb has narrowed to less than $2.50."
With China now the world's No.1 central-bank as well as private gold buyer, that put today's premium-per-ounce for gold delivered in China compared with London prices back in line with the 12-month average, down from Monday's near-$6 peak.
"It makes more sense to follow rather than fade this gold rally for now," ICBC Standard's analyst Tom Kendall suggests, with US jobs data more likely to disappoint that beat forecasts this week.
"The metal wants to go higher," agreed Tuesday night's technical analysis from Scotia Mocatta, the Canadian-owned bullion bank, "but has run into a couple of technical resistance levels.
"Neckline for [an] 'Inverted Head and Shoulders' formation comes in at $1081," says Scotia strategist Russell Browne, targeting a rise to $1115 if that pattern is completed.
"Emergence of a double bottom," agrees French bank Societe Generale's technical analysts, "coupled with an Inverted Head and Shoulder at $1045 levels [puts an] additional positive signal on short-term charts.
"These patterns will be confirmed on a break above $1090 with next levels at $1100/1105."
The gold market "appears to be attempting to base," says German bank Commerzbank's technical analyst Karen Jones in a weekly chart book, but "a close above $1089/98 [is] needed to confirm."
Silver has also seen "a loss of downside pressure," Jones adds, failing to "confirm" last month's new 6-year low and now "attempting to stabilise".
Dollar prices for silver bullion failed to hold a small rise above $14 per ounce on Wednesday, edging the Gold/Silver Ratio of relative prices higher to 77.7 ounces of silver equal to one ounce of gold. 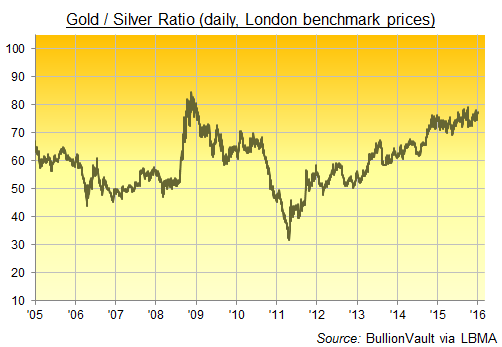 Averaging 54 over the last four-and-a-half decades, the Gold/Silver Ratio hit a 7-year peak in October at 79. It moved below 70 ounces of silver per 1 ounce of gold on only 3 trading days in 2015.