END_OF_DOCUMENT_TOKEN_TO_BE_REPLACED

GOLD INVESTING prices erased the last 3 weeks' gains versus a rising US Dollar on Friday in London as world stock markets also fell, following Wall Street lower after the Federal Reserve confirmed it plans to hike Dollar interest rates next month.
Dropping to $1212 per ounce – nearly 2.5% below late-October's 3-month high – wholesale gold investing prices also held near 3-week lows at £930 in British Pounds and 2-week lows of €1068 for Eurozone traders.
Crude oil meantime headed for its 10th consecutive daily drop – the longest losing streak on record according to Bloomberg – as news of record-high oil imports by China met worries over excess global supplies ahead of this weekend's meeting of the Opec oil cartel, rumored to bring production cuts from Saudi Arabia and Russia for 2019.
US household spending still shows "strong growth" according to the Fed's November statement on Thursday, but "business fixed investment has moderated from its rapid pace earlier in the year," the US central bank said, holding rates unchanged for this month as expected.
Despite October's stockmarket slump – the worst monthly drop since 2012 – "There was no 'financial stability' comments", notes Peter Boockvar at US advisors Bleakley Financial, "and there was not one mention about the slowing housing and auto sector."
"The flattening US yield curve," says new gold analysis from Marcus Garvey at Chinese-owned ICBC Standard Bank, pointing to the shrinking gap between short-term rates and longer-term yields, "[implies] that the market believes the US rates cycle is already approaching its latter stages.
"[But this] runs counter to a Dollar rally," he goes on, and if the Fed does continue to raise its key rate as expected, "Over the long-term, it will be hard for gold to escape US real [inflation-adjusted] rates" – a decade-long relationship from which bullion has so far diverged since the second half of 2017. 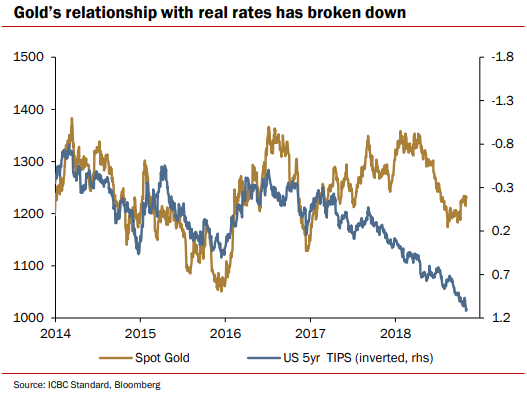 On the currency market Friday the Dollar regained the last of this week's prior 1.5% drop versus the Euro, and traded back towards end-October's 22-month highs versus the Chinese Yuan.
"Gold has come under pressure because of [this] stronger Dollar," says Peter Fung at dealers Wing Fung Precious Metals in Hong Kong.
"Market sentiment from here could [again] be bearish for gold."
October's stockmarket sell-off and rising gold bullion price saw "early signs of professional interest in the market plus improvement in grass roots retail [investment] activity," says the new Q3 2018 Gold Survey Update from Thomson Reuters GFMS, now renamed Refinitiv.
"We believe that there is scope for further price appreciation, but it does look as if this will be something of a long haul.
"There is little appetite as yet for fresh longs [in the speculative Comex derivatives market]. We are looking for a fourth quarter average of $1224, leading to an annual average for next year of $1285."
Silver outpaced gold's losses on Friday, falling to 6-week lows at $14.22 per ounce. Platinum prices held firmer at $857, shedding 1.2% from last Friday's 19-week closing high.