END_OF_DOCUMENT_TOKEN_TO_BE_REPLACED

GOLD BULLION rallied almost $10 per ounce on Friday from yesterday's 4-week lows against the Dollar, but failed to recover what analysts called the "key pivot" of $1300 despite claims of safe-haven buying after Pyongyang threatened to test a nuclear bomb over the Pacific Ocean.
The Yen rose faster versus the Dollar, erasing last week's 0.7% gain in gold for Japanese investors, as Kim Jong-un – leader of the regime in neighboring North Korea – called US President Trump "deranged", and Trump called Kim a "madman".
"Chinese interest was once again prevalent to underpin the early session bid," says one Asian bullion desk.
Ratings agency S&P today downgraded China's sovereign debt one notch to A+, saying that credit growth remains strong and "deleveraging is likely to be [too] gradual."
This was the " wrong decision" Beijing's Finance Ministry replied.
Chinese gold premiums, over and above the global reference rate of London prices, held Friday at $7 per ounce, still below the typical incentive for new imports of $9-10 per ounce.
After India's gold bullion imports tripled from a year ago to $15 billion-worth in April-August, "We don't favour a blanket restriction on gold imports," the Economic Times today quotes a Commerce Department official, "[because] it may involve disputes in the World Trade Organisation."
India's household gold demand is meantime estimated at half the usual level ahead of next month's key Diwali festival thanks to changes in tax reporting rules scaring away consumers.
"The [US Fed this week] delivered a more hawkish message than anticipated," says a new note from Chinese-owned bullion bank ICBC Standard, leaving scope for gold prices to fall further because "to date the reduction in [bullish] investor positioning has been limited."
Despite making no change to policy on Wednesday, the Federal Reserve's accompanying comments have now seen betting on it holding or raising US rates at the December decision more than reverse since gold prices hit 12-month highs in early September.
The likelihood of a hike to a ceiling of 1.50% has now doubled to better than 3-in-4 from just a month ago, according to analysis by futures exchange the CME Group. 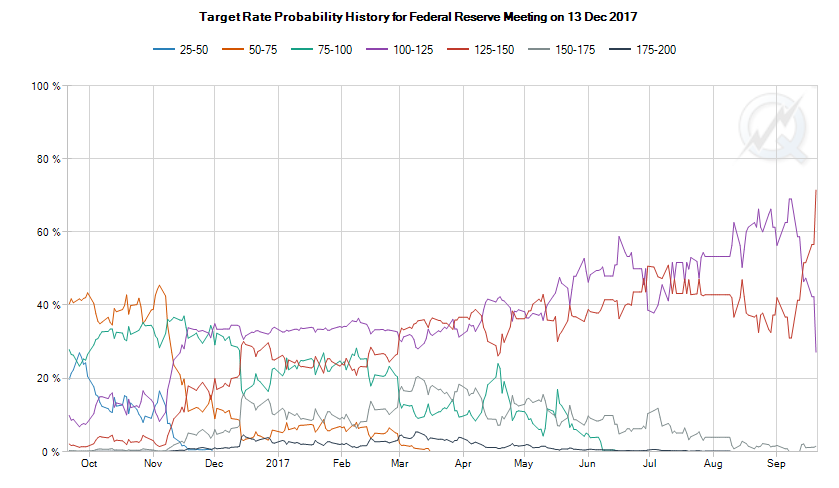 Holding the Chinese Yuan down near 3-week lows however, the Dollar today gave back this week's earlier gains versus the Euro.
The single-currency zone's main stockmarkets held 0.7% higher from last Friday, while gold priced in Euros flirted with 6-week lows near €1080 per ounce.
"We have heard the French people," said Front National party leader Marine Le Pen in a radio interview this morning, confirming that quitting the 19-nation Euro currency union is no longer a "priority" following her defeat in this spring's presidential election, when the FN also secured just 8 seats out of 577 in the National Assembly.
The British Pound today also recovered its mid-week drop versus the Dollar, peaking near $1.36 – the post-Brexit high now touched 3 times so far this month – ahead of Prime Minister Theresa May giving a speech in Italy aiming to "reboot" exit negotiations with the UK's current European Union partners.
That rise in Sterling saw the UK gold price in Pounds per ounce set new 7-week lows at £950, down £85 – some 8% – from the 10-month high reached at the start of September.