END_OF_DOCUMENT_TOKEN_TO_BE_REPLACED

GOLD BULLION held in a tight range in Asian and London trade on Tuesday, extending its lowest volatility since last summer as the Dollar rose despite weak US retail sales data, and crude oil hit new 3-month lows after Iran reached a nuclear proliferation deal with the US and other leading nations.
US retail sales showed a surprise 0.3% drop in June from May, despite imports to the US costing one-tenth less from a year before.
European stock markets revesed an earlier drop as crude oil prices then recovered following the UN5+1 deal with Tehran, which – after 20 months of talks – sees the US, Russia, China, France, Germany and the UK easing sanctions in what Iranian president Hassan Rouhani called "a good agreement" on monitoring the Middle Eastern state's nuclear energy program.
Gold bullion priced in Dollars stayed inside a $2.50 range either side of $1156 per ounce.
"Gold is steady despite the US Dollar trading stronger and interest rates moving [with] US Treasury yields a bit higher," says one London bullion desk.
Price action is "largely muted," it goes on, "with light volume and light physical [Asian] buying coming in on the dip to $1150 – just enough to support prices."
The SPDR Gold Trust (NYSEArca:GLD) saw its first inflow in 3 weeks on Tuesday, adding 1.5 tonnes to take the sum gold  backing held at HSBC's East London facilities to 709 tonnes – a 6-year low when reached last New Year's Eve.
Analysis by BullionVault today showed volatility in Dollar gold prices slowing near its lowest levels since the Western banking crisis exploded in summer 2007. 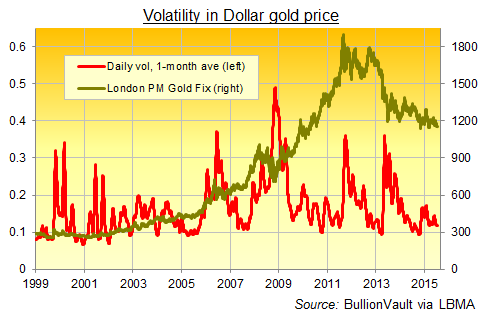 "Any further insight on the direction of Fed policy," says Swiss investment and bullion bank UBS, looking ahead to US central-bank chief Janet Yellen's twice-annual testimony to politicians starting Wednesday, "would in turn feed through to gold price action."
"We expect her to once again emphasize that the hiking cycle should be gradual," says a note from Bank of America-Merrill Lynch, "and to not veer from a strong data-dependent approach to policy."
New data from China today showed money-supply growth in the world's No.2 economy rising to 11.8% annually in June.
Broad social credit – estimating all private-sector lending, including peer-to-peer loans – rose 52% faster in June from May, reckons MarketWatch, even as the Shanghai stock market hit a 30% plunge .
"The next global recession will be made by China," says Morgan Stanley Investment Management's head of emerging markets Ruchir Sharma, now managing over $25 billion of client funds, speaking to Bloomberg.
"Over the next couple of years, China is likely to be the biggest source of vulnerability."
Wednesday's Asian opening will bring China's first official Q2 GDP estimate, expected to read 6.8% per year for the slowest annual rise since the Western world's 2008-2009 financial crisis.
"China's commodity imports for the first half of the year go some way to confirming what is already known," says Reuters commodity columnist Clyde Russell.
"Overall the picture remains one of soft demand," he says, with iron imports refusing to rise despite record-low world prices, copper imports hurt by the bursting "shadow banking" market for collateralized loans, and much of China's "fairly positive" crude oil imports in fact "flowing into strategic storage stockpiles."