END_OF_DOCUMENT_TOKEN_TO_BE_REPLACED

GOLD BULLION recovered most of yesterday's 1.1% drop against the Dollar in London trade Tuesday as stockmarkets slipped amid news of two terrorist attacks in Brussels, killing 34 people.
The Euro dropped almost 1 cent near 1-week lows against the Dollar before recovering to $1.1226, while European government bond prices gave back an early jump, holding the yield offered to new buyers unchanged from Monday.
10-year US Treasury yields slipped to 1.90%, a new 12-month low when first reached in early February, but still sharply higher from last month's sudden plunge to the lowest rate since late-2012 at 1.63%.
Commodity prices held flat as New York trade started, with silver retreating to $15.90 from its 3rd pop near 5-month highs above $16 per ounce inside the last week.
"There's a lot of fear stalking High Streets and Wall Street," said French investment bank Societe Generale's head of metals research Robin Bhar to Bloomberg on Monday, noting what he called "very good reasons investors have flocked to gold."
Expecting the US to avoid a recession, however, SocGen's analyst said investor inflows to gold would only expand if "[we] see a continuation of the fear trade."
Looking at consumer bullion and jewelry sales, "You've got to be cautious about gold demand," Bhar went on, "when the two biggest buyers, China and India, are seeing their economies slow, and their appetite for gold diminishing compared to previous years."
Investor demand for shares in the giant SPDR Gold Trust (NYSEArca:GLD) again grew Monday even as prices slipped, needing more large gold bullion bars to back the trust fund's stockmarket value.
The GLD has now expanded on 32 of the 54 trading days since New Year – a record run of additions never previously seen since the trust was launched in November 2004. 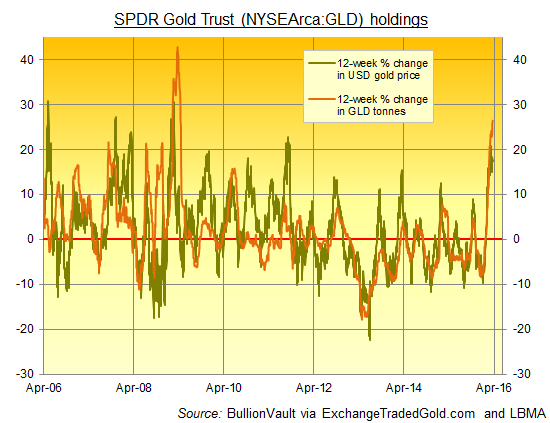 The world's largest silver ETF, the iShares Silver Trust (NYSEArca:SLV), also expanded again yesterday, taking the quantity of bullion held to back its stock above 10,274 tonnes.
Now the largest since December 2014, the SLV's backing has swollen 7.1% from early February's 3-year lows.
Tuesday's drop in the Euro's exchange rate helped the gold bullion price for German, French, Belgian and other single-currency zone investors rise to €1117 per ounce, a 10-month high when first reached this time in February.
Gold priced in British Pounds jumped fastest, however, adding 2.8% from Monday's 1-week low at touch £883 per ounce as Sterling fell on the FX market following weaker-than-expected UK inflation data.