END_OF_DOCUMENT_TOKEN_TO_BE_REPLACED

GOLD PRICES rallied off 3-week lows in Asian and London trade Friday, bottoming over 7% below Wednesday's US election results' spike at $1251 per ounce as European stock markets ended their 'Trump bump' rally and fell with emerging-market equities.
Crude oil fell hard despite a drop in the US Dollar on the FX market.
Gold priced in British Pounds flirted with its post-Brexit shock floor at £990 per ounce as Sterling traded above $1.26, its best level in over a month against the Dollar. 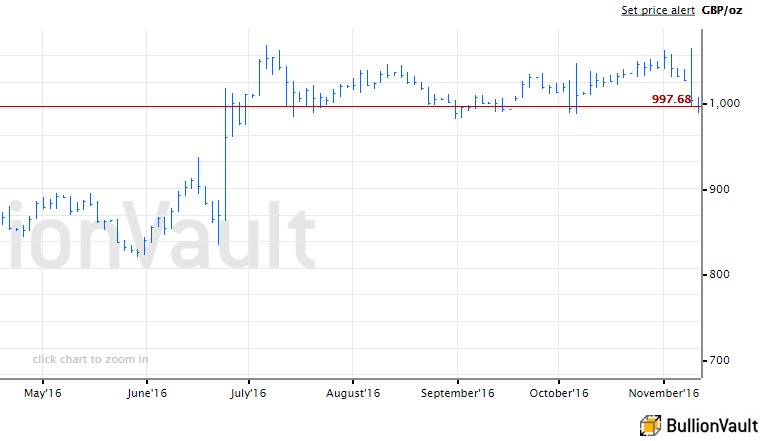 Gold prices swung 2.5% versus China's Yuan overnight in Shanghai, fixing at a 3-week low in the world's No.1 miner and consumer nation.
The Shanghai Gold Exchange's main contract saw what would have been record-high volume equal to 86 tonnes if not for Wednesday totalling two-thirds more as Trump's US election win became clear.
Buyers in China "[have] increased demand," Reuters quotes bullion bank HSBC's analyst James Steel, "and if gold falls further we could see more price-sensitive buying come into the market."
Western government bond prices also sank again Friday, driving 10-year US Treasury yields to 2016 highs above 2.15% and pushing 10-year German Bund yields up to 0.31% after they touched a record low minus 0.19% following the UK's Brexit referendum shock in midsummer.
Copper prices meantime shot to $6,000 per ton – the highest level since mid-2015 – with a 1-week gain of 19%, the fastest on record, amid frantic trading in Shanghai and London.
Silver held a 1.5% gain for the week, defying its typically strong correlation with gold prices.
In contrast to gold, silver finds over 50% of its end-use demand from industry, primarily in electrical and electronics but also now photo-voltaic cells for solar energy.
"As the most-traded base metal and a barometer of economic growth," says Bloomberg, "copper is...a proxy for investors' views that Trump's presidency will boost government spending on bridges, roads and airports."
With copper prices down 10% year-on-year before the US election, they offered "a better recession-predictor than the US National Bureau of Economic Research," said research from US bank Wells Fargo into the metal's famed status as "Dr.Copper – the metal with a PhD in economics."
Lagging other base metals' 2016 gains badly in summer late summer, copper faced a "wall of supply" hitting "softening demand" said a note from commodity analysts at US investment bank Goldman Sachs.
But now "it's going crazy,” says Robin Bhar, metals analyst at French investment bank and bullion market maker Societe Generale's London offices, "[but] it's too early to get short.
"Don't stand in front of a speeding train."
"I sold all my gold on the night of the election," former hedge-fund manager Stanley Druckenmiller told CNBC on Thursday, reversing a call he made public in May and saying that "All the reasons I have owned it for the last couple of years... may be ending. And by the way, they're ending globally."
Thursday saw over 13 tonnes of bullion lost from the gold needed to back the giant SPDR Gold Trust ETF (NYSEArca:GLD) as shareholders liquidated stock.
Cutting the GLD's holdings to 941 tonnes, that was the fourth heaviest 1-day outflow of 2016 to date.
"The drastic reversals in the stock market, bond prices, the US Dollar and gold tell you that Trump no longer represents the economic uncertainty he did before the election," says Edward Harrison at Credit Writedowns.
"All it took was one Presidential-quality acceptance speech to change that. [But] we will have to see who he picks to help him govern and what ideas they press forward. Trump has one chance to make his mark. If he misses, recession could loom and in two years’ time, voters will make him pay."
"Commodity markets seem to believe US President-elect Trump will quickly deliver the one thing that he probably can't," says London-based consultancy Capital Economics – "a surge in infrastructure spending.
"Trump's promises are, in any event, small beer compared to the $200bn that we estimate China spent on infrastructure in the first nine months of this year alone.
"We therefore expect the recent gains in the prices of industrial metals to be short-lived and gold to rally again."
Prepare for " bumper US growth" reckons former London Times' columnist and now chief economist Anatole Kaletsky at Hong Kong-based Dragonomics, telling clients that Trump's GDP "growth acceleration will be achieved by cutting taxes and ramping up public spending, especially on infrastructure and defence and probably also on healthcare.
Predicting both strong US growth and a return of inflation, Kaletsky sees the Dollars, US equities, industrial commodities and also gold "as the key beneficiaries" reports CityWire.