END_OF_DOCUMENT_TOKEN_TO_BE_REPLACED

GOLD PRICES extended yesterday's jump in London trade Friday, adding 1.3% for the week in Dollar terms after weak economic data and a new attack on US Fed policy from President Trump spurred market expectations of more interest-rate cuts ahead.
Betting on US Fed Funds futures at the CME derivatives exchange now sees a 93.5% chance the Federal Reserve will cut the cost of borrowing for the 3rd time in 4 months when Jerome Powell's team meets at the end of October.
That betting has leapt from 53.4% this time last month.

The Federal Reserve is derelict in its duties if it doesn’t lower the Rate and even, ideally, stimulate. Take a look around the World at our competitors. Germany and others are actually GETTING PAID to borrow money. Fed was way too fast to raise, and way too slow to cut! 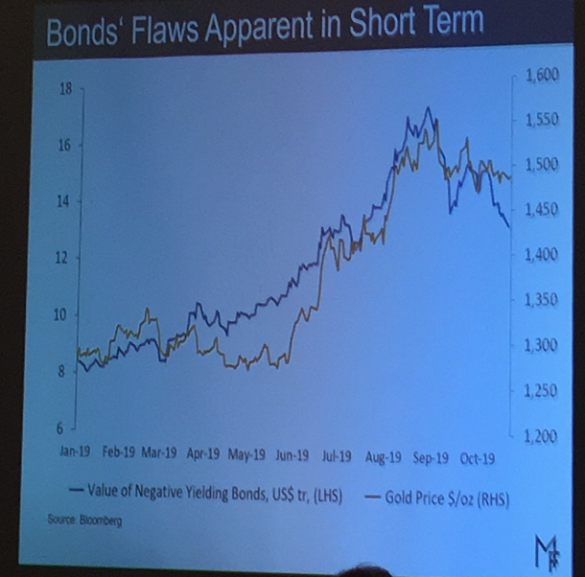 Forecasting a 2020 average gold price of $1520 – up 8.1% from 2019's full-year forecast, and the highest since the $1669 peak of 2012 – Meader said "Clearly, no one wants to be short gold now" when looking at speculative positioning data from the Comex futures and options market.
Gold priced in the Euro today rose near €1360 per ounce, reclaiming half of October's previous 3.0% drop.
The UK gold price in Pounds per ounce recovered all of last week's £30 plunge, rallying back to £1177 as Prime Minister Boris Johnson pushed for a general election but opposition Labour leader Jeremy Corbyn called for a delay until the European Union has confirmed the end-date for Britain's latest Brexit extension.
New data Thursday said manufacturing activity in both the Eurozone and Japan – the world's 2nd and 4th largest economies – is shrinking faster than analysts expected in October.
Orders for durable goods in No.1 economy the United States also showed a shock 1.1% drop for September, pulled sharply lower by a plunge in demand for new aircraft.
US consumer confidence is due later on Friday, plus Washington's latest monthly budget deficit.
Loans made in the last year to lower-income US households for leasing new automobiles "are souring at the fastest rate" since the 2008, according to analysis of Spanish bank Santander's default rates by credit-rating agency Moody's Investors Service.
"Many of those loans were packaged into bonds," it adds, in a further echo of the debt bubble leading up to the global financial crash.
Meantime in India – pushed into second place since 2013 for private gold consumption by China – "Gold sales on the most auspicious day [on the Hindu calendar were] slow as high prices and concerns about an economic slowdown deter customers," reports Bloomberg of the key Diwali festival, starting today with Dhanteras.
High prices and extra taxes are also widely blamed for a possible 50% drop in gold sales versus the festive season last year.