END_OF_DOCUMENT_TOKEN_TO_BE_REPLACED

GOLD PRICES touched a near 2-week low versus the Dollar overnight Tuesday, rallying in London trade but holding most of yesterday's sharp $30 per ounce drop as US interest rates ticked higher again in the bond market and Western stock market erased early strong gains.
The Euro also touched its lowest Dollar value so far in May, while the British Pound rallied from its lowest level in almost 3 weeks ahead of Thursday's Bank of England decision on interest rates.
That held gold priced in Sterling at £875 per ounce, a 29-month high when first reached in February. 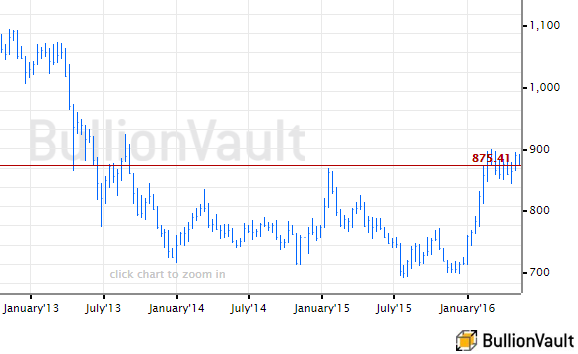 Chinese gold prices also steadied as the Yuan retreated to a 2-month low against the Dollar on the FX market.
Tuesday's Shanghai gold price benchmark came in equal to more than $1268 per ounce, some $3.85 above then-current quotes for London settlement.
Trading in the Shanghai Gold Exchange's main spot contract, however, halved from Monday's jump to a 2-month record-high volume.
"The Fed target rate has a significant impact on the financial sector," says new analysis from French investment and bullion bank Societe Generale, finding that "changes in Fed interest-rate hike probabilities are associated with significant and consistent price moves in both gold and silver.
Noting a more sizeable response in commodity prices than in the US Dollar's FX rate, "Gold was the most responsive commodity in our analysis overall," says the research, produced jointly by SocGen's Cross Commodity Strategy and Commodities Research teams, and looking at changing expectations of a Fed rate hike – as measured by the CME Group's Fedwatch widget – since January 2014.
The probability of a Fed rate hike in June to 0.75% rose over the last month from 1-in-44 to 1-in-13 according to betting on CME interest-rate futures.
The odds of US rates reaching 1.0% at the December meeting have meantime doubled since this point in April to 1-in-8.
US crude oil prices today stabilized below $45 per barrel, and silver recovered 1.1% from an overnight retreat to $16.91 per ounce, the first trip below $17 in 2 weeks.
"The pullback we had been talking about [has] happened," says Tuesday's trading note from London brokerage Marex Spectron's David Govett.
Calling it "a reasonably orderly drop, which leads me to believe that there was not much panic...the move was due more to the stronger Dollar," Govett adds.
"[But] I suspect whatever happens we will see some selling on any rally...for the time being."
Jewelry stores in India – the world's No.2 gold-consumer nation behind China – meantime reported weak gold sales over the Akshaya Tritiya festival ending culminating Monday.
"Compared to last year demand is nearly 35% lower," Reuters quotes said Kumar Jain, vice-president of the Mumbai Jewellers Association.
Worsening drought in central states is also denting gold demand, according to local press, as rural incomes are likely to suffer from a poor harvest, with armed guards already posted at some reservoirs to prevent theft by desperate farmers.
The number of forest fires in India so far in 2016 exceeds each of the last three years, according to the Ministry of Environment.