END_OF_DOCUMENT_TOKEN_TO_BE_REPLACED

GOLD PRICES neared their highest weekly finish against the Dollar in almost 4 years on Friday, trading 3.0% up for the week as the US currency extended its drop on the FX market.
Friday morning's benchmarking auction in London set the highest AM gold price since late January's 17-month high, finding a balance of buying and selling demand at $1358.60 per ounce.
An afternoon LBMA Gold Price above $1354.25 would mark bullion's highest weekly finish in US Dollar terms since mid-March 2014.
Back then, 10-year US Treasury yields stood at 2.65% against today's level of 2.88%
Two-year yields, in contrast, have jumped from 0.36% to 2.19% in nominal terms, taking shorter-term Dollar interest rates to their highest in almost a decade.
Adjusted by inflation, real 2-year rates have risen from minus 1.2% to nearly 0% on the latest US consumer-price index.
Only one month since 2012 has seen gold prices avoid a drop from four years' previously when real 2-year US Treasury yields rose one percentage point or more across the same time-frame.
(Read more about the typical, traditional link between gold prices and bond yields here.) 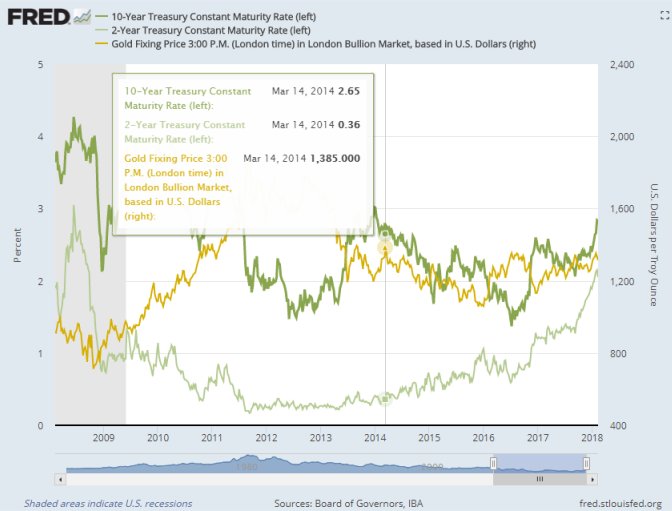 Holding strong on Thursday despite the start of the Lunar New Year holiday in No.1 gold-consumer nation China, the volume of gold matched at London's PM benchmarking auction has so far this week beaten January's daily average by almost 25%.
January's average daily volume was already the strongest since Donald Trump's election victory of November 2016 according to data from the process's independent administrators IBA.
January saw London's afternoon benchmark gold price set its highest monthly average since August 2016 at $1331 and its highest monthly close since August 2013 at $1345 per ounce.
Outside the Dollar however, gold prices continued to hold near the lower-end of their recent ranges on Friday, rising to only £966 for UK investors and adding 1.3% for the week in Euro terms to €1088 per ounce.
"Can bond markets digest the huge supply of US Treasuries that will be issued this year?" wonders investment director Anthony Doyle in a blog at UK asset management giant M&G.
"The US government will have to rollover 28% of its total debt in 2018, equivalent to over $3 trillion in US Treasuries.
"In addition, some estimates suggest that the US federal budget deficit is on track to rise to over $1 trillion in 2019.
"With the Trump fiscal expansion plans likely to be funded by the issuance of short-term debt, the next few years will see a large increase in US Treasury supply."