END_OF_DOCUMENT_TOKEN_TO_BE_REPLACED

GOLD PRICES rebounded from a drop below last week's closing level on Thursday in London, stemming the metal's 4.4% plunge off yesterday's fresh 7-year high in US Dollar terms.
That took gold prices down to $1540 per ounce, sharply below early Wednesday's jump to $1611 and only $5 above the technical chart  'key support' level of 2011-2013 which gold failed to hold after breaking higher in late summer 2019. 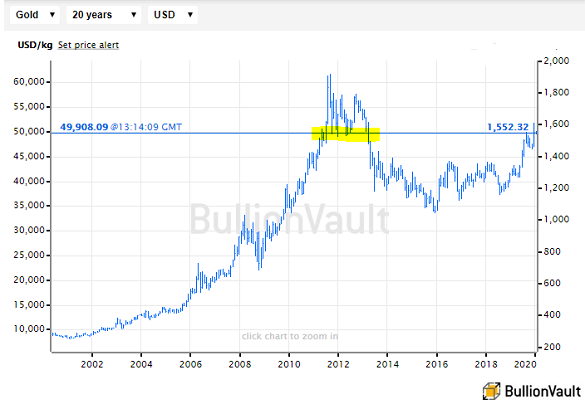 Major government bond prices were mixed, edging longer-term US and German interest rates higher but easing UK and Italian rates while world stock markets extended their run of new record highs.
Crude oil meantime held at $66 per barrel of European benchmark Brent – down almost 8% from this week's spikes to 8-month highs and back to levels seen in mid-December – after US President Trump claimed Iran "seems to be standing down" but Abdollah Araghi, the Iranian military commander set to replace Major General Qassem Soleimani, assasinated by a US drone last week, vowed "harsher revenge" than yesterday's rocket attacks on US targets in Iraq.
"Overall, the ability for gold to consistently adapt from internalizing old drivers (escalating trade rhetoric, negative risk appetite...) to new drivers (falling US Dollar, upping of inflation expectations...), back again to internalizing its [safe] haven qualities is a constructive development for the longer-term outlook," says a note from Canadian retail, investment and bullion bank Scotia.
Written before this week's $1600 spike, "$1450 was the new hard floor," says Scotiabank's note, "but gold is now firmly in a spot where the risk/reward in being directionally short is not favorable -- $1500 is increasingly looking like the new 2020 floor."
"Prices have corrected because of the easing tensions between Iran and the United States," says Reuters today, quoting commodities analyst Hareesh V. at stockbrokers Geojit Financial Services in India.
"Apart from that, the Dollar has been on the positive side for the last 2-3 days and if it rises further, definitely we can see more correction in gold prices."
With Dollar gold prices flat for the week Thursday lunchtime in London, UK gold prices were barely higher from last Friday's finish at £1190 and Euro gold was also little moved at €1397.50 – some 1.2% below yesterday's new all-time high.

"Buyers look to be taking advantage of current levels," says the Asian trading desk of Swiss refining group MKS Pamp, "to either build or reinstate positions."
With gold's key household-buying festival of Chinese New Year now barely 2 weeks away, the premium for bullion landed in the metal's No.1 consumer nation – over and above London quotes – today remained "buoyant" above $7 per ounce, MKS adds, albeit still below the $9 average incentive for new imports.
China's cost of living continued to rise at an 8-year record of 4.5% annually last month, new data showed Thursday, as the price of pork – which also sees China's demand peak at Lunar New Year – rose yet again despite Beijing's politburo trying to fight the impact of African swine fever by releasing 100,000 tons of meat for sale.