END_OF_DOCUMENT_TOKEN_TO_BE_REPLACED

GOLD PRICES regained most of an earlier 1.5% drop from yesterday's 3-month Dollar high in London on Tuesday, trading back above $1165 per ounce as US Fed officials disagreed about the odds of a December rate rise, and New York stock markets followed Europe and Asia lower following poor Chinese trade data.
China's trade surplus rose to a new record of $60 billion in September thanks only to a 17% year-over-year collapse in imports.
US investment bank Goldman Sachs now calls the slowdown in emerging markets "a new wave in the Global Financial Crisis," moving on from first the US and then Eurozone.
Gold priced in British Pounds meantime hit new 4-month highs Tuesday above £765 per ounce – gaining 10% from August's fresh 5.5-year lows – after new inflation data showed UK consumer prices falling year-over-year last month.
Reading -0.1% for the second time this year, the UK government's preferred CPI measure of inflation read below zero in September for only the second time on its 26-year data series. 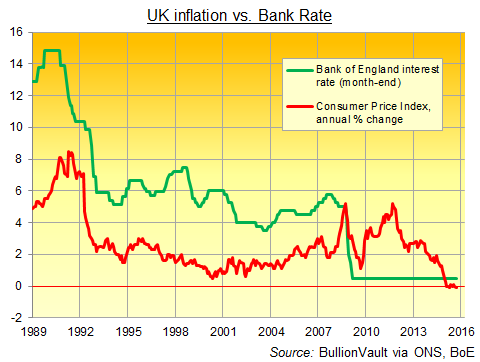 US consumer-price inflation data for last month are due Wednesday.
Germany's consumer price index today showed 0% change in September from 1 year before, slipping 0.2% from August.
"There's too much [noise] out of Federal Reserve officials right now," says one bullion bank's sales desk today, saying that "too much talk has a weakening effect on global markets and adds unnecessary volatility – especially when there’s nothing to say."
US Fed vice chair Stanley Fischer yesterday called a December rate hike "an expectation, not a commitment."
Fed governor Lael Brainard overnight made what she called " the case for watching and waiting...[because] in contrast to the considerable progress in the labor market, inflation has been stubbornly low, even excluding energy prices."
But the FOMC "has laid out clear goals based on a legislated mandate," countered St.Louis Fed president James Bullard this morning, and "the goals [of zero-rate policy] have arguably been met.
"There is little downside" to so-called 'lift off' from zero, said Bullard – a known 'hawk' but not currently a voting member, leaving only Richmond Fed president Lacker in vote to raise rates at the September meeting – "as policy will still be exceptionally accommodative during the normalization process."
Dollar gold prices have risen up "through the 2015 downtrend and [are] approaching the 200-day and 55-week moving average," says technical analyst Karen Jones at German bank Commerzbank.
"We suspect longer term that the market is attempting to base," says Jones, pointing to a pattern on the monthly price chart and calling "the recent low at $1077...an intermediate
turning point."
Tuesday morning's dip "[was] clearly profit-taking by speculative financial investors," reckon Jones' commodity-desk colleagues at Commerzbank, who add that yesterday's "failure of the gold price to exceed its August high presumably sparked selling for technical reasons."
Monday's rally to $1169 "took the market slightly by surprise amidst short covering and some fresh buying," says broker David Govett at Marex Spectron in London, warning against bullish forecasts and saying "these moves are predicated more by position covering than genuine investor business."