END_OF_DOCUMENT_TOKEN_TO_BE_REPLACED

GOLD PRICE losses of 0.7% for the week held into afternoon trading in London on Friday, with wholesale bullion failing to reverse yesterday's drop even as world stock markets slipped back from new multi-month highs despite solid economic data from China.
Beijing reported GDP growth of 6.7% for the first quarter of 2016, in line with consensus expectations, while new bank lending beat analyst forecasts for March, as did retail sales, foreign direct investment, and industrial production growth.
Japan's industrial output, in contrast, showed a 1.2% year-on-year drop for February.
Silver meantime held firmer than gold prices for the fourth day running, trading above $16.20 per ounce for a 5.6% rise from last Friday at the highest weekly finish since May 2015.
That drove the Gold/Silver Ratio of the two metals' prices down to a new 2016 low at 76 ounces of silver per 1 ounce of gold, sharply below mid-February's near-20 year highs. 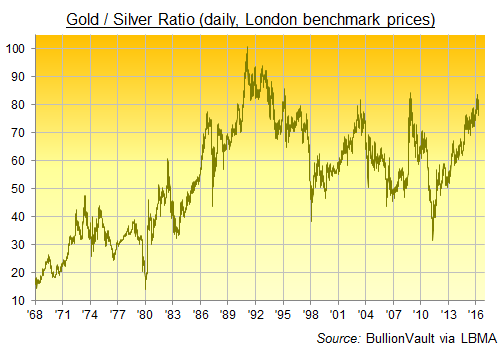 The US Dollar trimmed this week's rally against the Euro, helping the gold price for German, French, Italian and Spanish investors hold a small 0.3% gain for the week above €1090 per ounce.
After dropping through gold's 50-day moving average on Thursday at $1231, the Dollar price "will likely test the $1200-1207 level and catch a bid there," says the latest technical analysis from Canadian investment and bullion bank Scotiabank.
"It's very important for the metal to hold that support. A break to the downside will likely put this rally in jeopardy."
More bearish still, "A distribution top is being formed," writes private bank and investment manager Brown Brothers Harriman's chief currency strategist Marc Chandler, pointing "specifically [to] a potential head and shoulders top.
"The left shoulder was formed by the spike on February 11...the head in the first half of March. The right shoulder was set earlier this week. 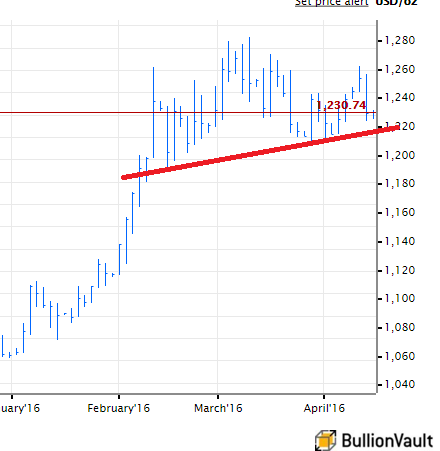 "To be sure, the neckline has not been penetrated," says Chandler.
But rising slowly, the neckline linking the lows of the pattern now "comes in near $1213 today," with this bearish head-and-shoulders formation projecting a drop to $1140 on Chandler's charts if completed.
Major government bond prices meantime edged higher on Friday, nudging interest rates down, as commodities fell sharply, with Europe's Brent crude oil benchmark losing 2.3% to $40 per barrel.
The gold price "continues to trade at the mercy of the US Dollar," said an Asian trading note overnight from Swiss refinery and finance group MKS, "and is likely to remain under pressure in the short term, possibly testing towards the recent support around $1210."