END_OF_DOCUMENT_TOKEN_TO_BE_REPLACED

GOLD PRICES slipped below $1250 per ounce Friday morning in London, erasing the week's earlier post-Fed gain of 1.6% as world stock markets rose with commodity prices.
Silver held firmer, adding 3.0% for the week but retreating from the week's second foray above $16 per ounce – a level last seen in October.
Bullion holdings at the giant SPDR Gold Trust (NYSEArca:GLD) – the largest gold-backed exchange-traded fund – have now swollen 28% since mid-December's 7-year lows, recovering the previous 18 months' outflow of 178 tonnes in just 13 weeks. 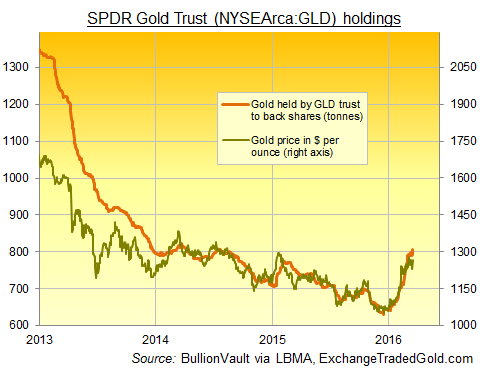 Bullion holdings at the iShares Silver Trust (NYSEArca:SLV) have meantime grown 6% since February's 3-year lows, but held unchanged for more than a week at a 7-month high of 10,135 tonnes, despite metal prices rising over 4% since last Thursday.
"[This week's] jump in price supports our view that gold's uptrend remains intact despite the recent pullbacks," says a technical analysis from Canada-based Scotiabank.
"We remain bearish about the gold price," counters Robin Bhar at Societe Generale, despite raising the French investment and bullion bank's 2016 average-price forecast by 15%.
Formerly at $1000 – the third most bearish amongst 31 professional analysts taking part in the LBMA's annual forecast survey this New Year – SocGen's target for 2016's average price now stands where it previously said the daily price would top at $1150.
Gold prices have already peaked more than $100 per ounce above that, averaging $1174 per ounce so far since New Year.
"However," says SocGen's revised outlook, "we believe that the rally is not built on solid foundations, as gold will come under continued pressure in a rising interest rate environment."
After the Bank of England set UK interest rates at a record low of 0.5% for the 84th month running on Thursday, "A rate reduction remains in our armory," says European Central Bank chief economist Peter Praet in an interview with Italy's La Repubblica newspaper today, contradicting ECB president Draghi's comments against taking deposit rates further below zero at last week's policy press conference.
"There has been a lot of skepticism recently about monetary policy," Praet goes on, but "there are many things you can do.
"You [could] issue currency and distribute it to people. That's helicopter money. The question is if and when is it opportune to make recourse to that really extreme sort of instrument."
"The action of policymakers so far this year seems to scream out one message," writes FX strategist Steven Barrow at Chinese-owned investment and bullion bank ICBC Standard today.
"PANIC.
"The Fed's volte-face on its prior idea for four rate hikes this year has made all the headlines," Barrow explains. But most telling is that this week's dramatic cut to the Fed's interest-rate forecasts comes just as its "data dependency mantra might suggest otherwise," with unemployment low and falling "and inflation has started to creep higher."
India's huge jewelry retailing industry meantime stayed shut for a 17th day of strikes on Friday, as one trade association – formerly a strong supporter of the Modi government –  asked its members to write to the prime minister demanding the "rollback" of a new 1% sales tax added by the new Budget on 29 February.
Government-launched financial schemes aimed at deterring some of India's world-beating physical gold demand have, since November, drawn only 5 tonnes-worth of investment into Sovereign Gold Bonds, reports the Financial Express today, and attracted less than 2 tonnes to the Gold Monetisation Scheme.