END_OF_DOCUMENT_TOKEN_TO_BE_REPLACED

GOLD INVESTMENT prices held a 1.3% rally from yesterday's drop near 2016's starting level in London on Friday, as crude oil sank to 11-year lows beneath $30 per barrel and world stock markets slumped again, led by China once more.
Gold priced in Dollars cut the week's investment loss to 1.8% at $1084 per ounce overnight as Shanghai's main share index dropped 3.6% to hit 13-month lows after new data said China's bank lending badly undershot forecasts for December.
Germany's Dax then fell for the 8th of 10 sessions so far in 2016 – and New York equity futures pointed 1.8% lower on average – while US Treasury bonds rose yet again, pushing the yield on 10-year US government debt down to 2.04%.
The lowest level since October, before the US Fed finally raised its key overnight rate from 0% for the first time since 2009, that 10-year yield was below the annual average of the last 3 years.
"Analyst profit downgrades outnumbered upgrades by the most since 2009 last week," says Bloomberg, citing monthly data from US banking giant Citigroup.
Gold, however, "is not yet seen as a potential solution" to investment woes, says one London bullion bank's sales desk in a note, with "only patchy additions of real-money flow" from larger, long-term investment managers.
"Buyers of gold ETFs continue to pile in," the note goes on, "but the price reaction remains muted as selling pressure from the mining industry is apparent" as producers look to 'hedge' by locking in current prices for future output.
"Playing gold volatilities is a safer bet."
The giant SPDR Gold Trust (NYSEArca:GLD) – the world's largest exchange-traded fund by value at its 2011 peak – has so far needed to add 11 tonnes to the bullion held to back its shares in issue in 2016, the strongest 2-week addition since October. 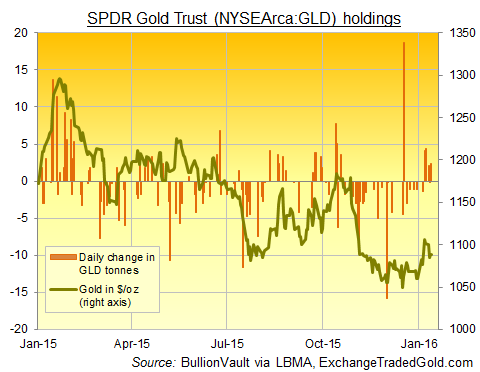 Silver ETF investment through the iShares Silver Trust, in contrast (NYSEArca:SLV) has shrunk 0.5% by weight to a 6-week low of 9,840 tonnes, worth some $4.4 billion.
The gold investment GLD neared the start of New York trade today with a net asset value of some $22.7bn, down over 70% from its peak of 4.5 years ago.
Gold is "unconvincing," says a note from strategist Tom Kendall at Chinese-owned ICBC Standard Bank, calling gold's "failure to hold above $1100 earlier this week...disappointing in the context of the macro risk-off environment.
"Getting to the $1140-ish area by Chinese New Year (8 Feb)" – Kendall's previous call – "has clearly become more of a challenge," he goes on, with "physical markets best described as just 'OK'..." as bullion sales by ICBC Standard Bank to Asian wholesalers rise but remain "a long way shy" of demand at this point in 2014 or 2015.