END_OF_DOCUMENT_TOKEN_TO_BE_REPLACED

GOLD INVESTING prices took their sharpest dive in a week Friday lunchtime in London, dropping $15 per ounce from new 3-month highs as the Dollar rallied – and bond yields rose – despite the weakest reading on US jobs creation since September.
Prices held on track for a third weekly gain however, the longest run of investing gains since April last year. 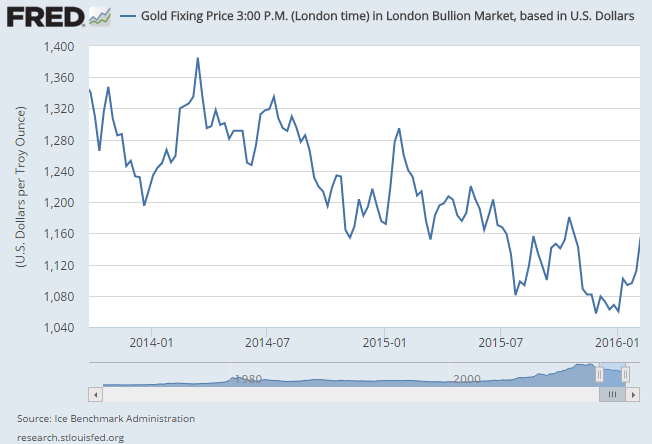 Non-farm payrolls expanded by only 151,000 in January, the US Department of Labor said as the start of New York trade drew near – well below consensus forecasts of 190,000.
December's growth was also revised lower. But the overall jobless rate edged down near an 8-year low at 4.9%.
"The notable 0.5% monthly increase in wages [and] the reduction in the unemployment rate...serves as a caution to markets that it is too early to take a Federal Reserve March hike completely off the table," says Mohamed El-Erian, chief economic adviser at investing services giant Allianz.
But "we see no compelling reason for more than a normal retracement [in gold]," said an earlier note from investment and bullion bank HSBC.
"The rally is underpinned by risk off sentiment, a weaker US Dollar and a shift in global monetary policy."
US stock futures turned lower as US bonds prices fell following Friday's jobs data, nudging the interest rate offered by 10-year Treasurys up 3 basis points from Thursday's new 12-month low of 1.84%.
Having touched a fresh 14-week high at $1161 per ounce as the US jobs data came in, gold dropped $10 over the next 15 minutes.
That cut gold investing gains to 2.9% for the week.
Silver also slipped, but held 3.5% weekly gains – its third Friday-to-Friday rise on the run – at $14.77 per ounce.
"Gold [has been] currently living up to its reputation as a safe haven in uncertain times," said a note on investing flows from commodity analysts at Commerzbank in Germany early Friday.
The giant SPDR Gold Trust (NYSEArca:GLD) grew again on Thursday, swelling 8% since New Year and now going 20 trading days without a single outflow of bullion.
The GLD last saw a 4-week stretch without any outflows in July 2014.
Meantime in key consumer market China, however, "For the better part of February it will be a quiet time for precious metals business," Reuters quotes one Shanghai bank trader, as next week's Chinese New Year holiday marks the peak season for retail sales.
"Domestic retail demand for bullion has been an important but secondary factor" in China's bullion demand, counters bullion-dealing ICBC Standard Bank's Tom Kendall in a note.
Instead, the Chinese gold market "has been more about financially-driven flows in response to interest rates and spreads," Kendall says, noting that gold has proved "a very efficient vehicle to convert onshore RMB into US Dollar-denominated hard assets parked off shore.
That's neither bullish nor bearish for gold investing, Standard concludes. "But it is a rather different narrative to those that the market is more frequently fed."