END_OF_DOCUMENT_TOKEN_TO_BE_REPLACED

GOLD PRICE gaps between London and New York whipped violently once more on Thursday, cutting what was a $100 premium for Comex futures contracts in March to a $10 discount per ounce as US warehouses continued to see fresh deliveries.
July gold futures then rallied to show a $7 premium as London spot traded up to $1723, over 1.7% above yesterday's 3-week low.
With US Comex traders spooked during the Covid Crisis over their ability to ship gold from the bullion market's central trading and storage hub of London, stockpiles in New York depositories have now more than doubled since the UK went into lockdown on 23 March.
Counter to market expectations and betting therefore, "Things have moved," confirmed Allan Finn, Global Commodities Director at secure logistics specialists Malca Amit, speaking on a webinar today for members of the London Bullion Market Association.
"The rise in Comex warehouse stocks is testimony to that."
The initial speed with which airlines stopped flying "took people by surprise" added Mark Woolley, Managing Director, Brink's Limited, but since then the industry has switched to new routes and new carriers "to rebuild our model pretty quickly."
Despite the global lockdown in fact, stockpiles across the bullion market have achieved "more movement than we've seen in some time" agreed Brian Hayward, Head of Loomis International UK. 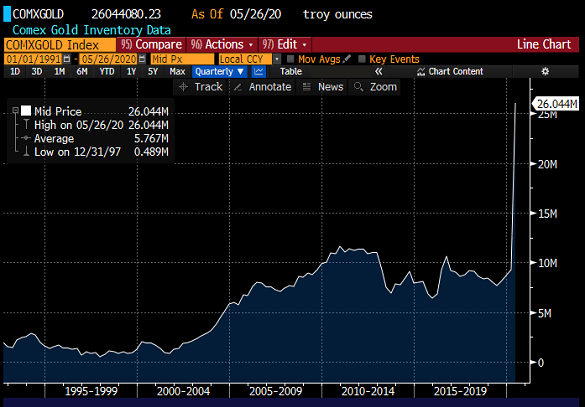 "A scramble for the metal [is] turning into a glut," says Bloomberg.
"The premium for New York futures over London surged as traders rushed to avoid delivering in April, instead buying back contracts they had sold short."
But today saw the June contract – now expiring – sink to a $10 discount to August as bullish traders wanting to maintain their position rolled over to the next contract.
That also put June futures at $0 difference to London 'spot' quotes for physical bullion, albeit recovered from a $10 discount overnight.
More broadly for gold prices globally, "Escalating US-China tensions provide a support for the gold market," says Swiss refining group MKS Pamp's Asian trading desk, "[but] the European stimulus announcement [has] buoyed stocks."
After Trump said the US no longer considers Hong Kong "autonomous" from the People's Republic of China, "The nuclear option is certainly on the table," Inkstone News quotes a former senior White House official.
"This would see Hong Kong's [special] status removed...[making] the city vulnerable to [US] trade war tariffs, technological export controls, visa and travel restrictions and greater financial sector scrutiny."
European Commission president Ursula von der Leyen meantime told the region's 27-nation Parliament in Brussels yesterday that she wants to give €500bn in grants and €250bn in loans in her 'Next Generation EU' plan, all raised from investors on the bond market, with European Union taxpayers on the hook for servicing and repaying those debts.
With gold priced in Euros rebounding 1.4% today from Wednesday's 4-week low at €1540 per ounce, the EuroStoxx 600 index today reached its highest since 6 March, rallying over 25% from that month's plunge to multi-year lows.
On top of her €750 billion government-funded stimulus, Von Der Leyen also wants private business to inject €600bn in return for €60bn of loan guarantees for corporate borrowers.
"Although investment gold demand is very strong," says London bullion market-making bank Standard Chartered's Suki Cooper, "physical [consumer] demand is very weak, particularly jewelry in the key markets of China and India."
Most clearly signalled by surging inflows to gold-backed ETF products such as the $63bn GLD trust fund, "If we see that investment demand slow down as economies start to re-open," says Cooper, "we could see that downside risk becoming more material."
"Deleveraging of gold positions will be limited," reckons another London bullion desk, "because there are still a lot of uncertainties piling up and gold still has a relatively important part to play in hedging against them."
Looking at the split between June and August Comex futures meantime, "Gold remains a large, liquid market," says strategist John Reade at the mining-industry's World Gold Council "but it's not functioning as well as it used to.
"This appears to be a particular problem for futures market speculators and investors."
Comex silver futures meantime extended their premium to London bullion on Thursday, rising 50 cents above spot to reach $17.84 per ounce on July contracts – the level from which prices sank by 1/3rd in March.