END_OF_DOCUMENT_TOKEN_TO_BE_REPLACED

GOLD BARS traded in London's wholesale market – center of the world's bullion trade – held near 4-week highs Tuesday afternoon, dropping back $20 from an overnight top of $1670 but lagging the 'paper gold' price for Comex futures contracts traded in New York as "dislocations continue" amid the Coronavirus crisis and lockdowns.
Despite the pace of infection and death-toll across Europe accelerating again, with Africa now seeing Covid-19 claim nearly 500 lives so far, Asian and European stock markets meantime extended their rebound from March's 4-year and 7-year lows respectively after New York equities rallied over 7% on Monday – cutting the S&P500 index's loss from mid-February's all-time high to barely one-fifth.
Government bond prices eased back, edging longer-term interest rates higher, with 10-year US Treasury yields nearing 2-week highs at 0.76% per annum.
Crude oil also continued to surge from its recent multi-decade lows as Russia and Saudi Arabia were rumored to be agreeing dramatic cuts to output.
But geographic gaps widened in oil prices, with the United States' WTI benchmark now rallying 31.9% from the end of March to $26.40 while Europe's Brent benchmark has gained 48.6% to $33.85 per barrel.
Back in gold, and looking at New York's June Comex futures contract – now the most active exchange-traded gold derivative – "The diﬀerential [over London bullion bars] approached $100 overnight as market participants continue to battle with shipping logistics," explains Rhona O'Connell at brokerage INTL FCStone.
"The contango between spot gold and the active gold futures contract is [so] wide...thanks to risk management against possible delivery against Comex contracts – even though less than 5% of open interest ever comes to delivery." 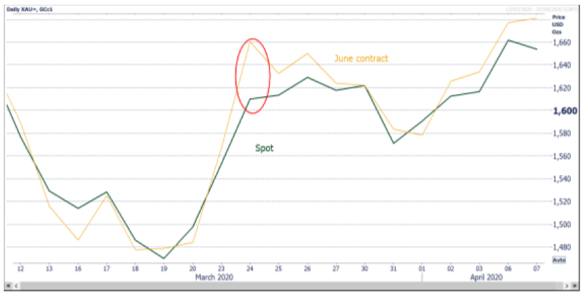 "The Swiss reﬁneries are back on stream with limited capacity usage, which helps, but the material still has to be moved."
That gap held at $40 per ounce as New York traders got to their work-from-home desks on Tuesday, contrasting with the more typical $5 spread after the Swiss shutdowns, plus the UK Government's formal 'lockdown' orders caused the typical easy flow of gold between the two markets to fracture.
Comex-approved warehouses in the north-eastern United States meantime report record levels of gold bar inventories, with stocks now including kilo and also 400-ounce London Good Delivery bars, as well as bars meeting the Comex's 100-ounce specifications.
"This is risk management" by commercial traders hedging their physical stockpiles with short bets on the Comex, says O'Connell.
"Warehouse stocks also swelled in the post-Lehman crisis."
Trading volumes through London's bullion market last month rose more than 85% from March 2019, according to figures shared with BullionVault by LBMA-i data providers Nasdaq. 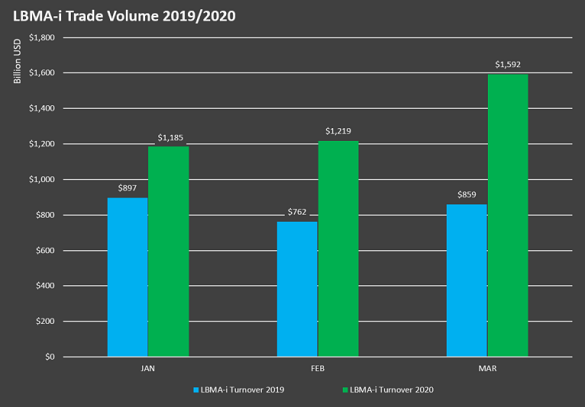 Primarily vaulted in London, gold-backed ETF products needed some 3,165 tonnes of bullion by this time last week says data from the mining industry's World Gold Council – a new record and 4.3% above end-February levels, driven by US investment demand.
In contrast, gold bullion bars landed in China – the world No.1 consumer market – today traded $20 below London quotes, as poor demand and ample supply conspired with a weak Yuan to extend Shanghai's near-record discount.
China's central bank reserves of gold were unchanged last month, new data said Tuesday, but its total foreign reserves shrank by 1.5% to a 17-month low.
"The drop in China's [central bank] FX reserves is far bigger than can be accounted for by valuation changes," notes Khoon Goh in Singapore for ANZ Bank.
"This suggests that the [Beijing] authorities may have intervened to halt the Yuan's decline during March, and could explain why there was very strong support."
UK consultancy Capital Economics says that the impact of coronavirus and the resulting shutdowns will be "markedly worse than during the 1998 financial crisis" for emerging Asian ecomnomies, while Latin America – dependent in part on oil exports – will be "comparable" to the early 1980s' debt crisis.