END_OF_DOCUMENT_TOKEN_TO_BE_REPLACED

GOLD BULLION came within $6 per ounce of last week's 12-month US Dollar high in London on Tuesday, setting a fresh 13-month high for Eurozone investors as world stockmarkets rose again and crude oil extended its recovery to 33% from last month's 13-year lows.
As gold priced in Dollars touched $1247, bullion in Euro terms set its highest spot price since late-January 2015 above €1147.
Germany's Dax index of Frankfurt stocks meantime recovered start-February's level, some 10% above last month's 18-month lows, after new data said manufacturing activity in the 19-nation Eurozone is holding firmer than expected, while unemployment has fallen to 4-year lows.
China's manufacturing PMI, in contrast, gave the weakest reading since late 2011, with both the NBS and Caixin surveys pointing to contraction.
Turnover in the Shanghai Gold Exchange's main contract held at more than twice the last 18 months' average, but slipped to two-thirds of last Thursday's new all-time record with contracts worth some 45 tonnes of bullion changing hands.
"The lowest Chinese manufacturing PMI since Nov 2011...saw the metal drop sharply," says a note from Swiss refiners MKS, but "it was very short lived...with bargain hunters quick to step in."
The Yuan held firm on the FX market after Monday's cut to Chinese banks' reserve requirement ratios – the fifth such cut in a year, aimed at spurring new lending – capping the Shanghai gold premium at 50 cents per ounce above London quotes.
One jewelry trade body in India – the world's No.1 consumer market for gold – today called an indefinite strike in protest at the new 1% excise, announced in yesterday's 2016 Budget and added to the 10% import duty which the industry had hoped would be cut.
Japan's government meantime borrowed 10-year money today at a negative rate of interest for the first time ever, with a sale of new bonds paying buyers -0.024% annually if held to redemption in 2026.
Major government bond prices worldwide eased back in price as equities rose, nudging 10-year US Treasury yields up to 1.75%.
The first time US yields fell to this level, gold traded at record highs above $1900 per ounce. 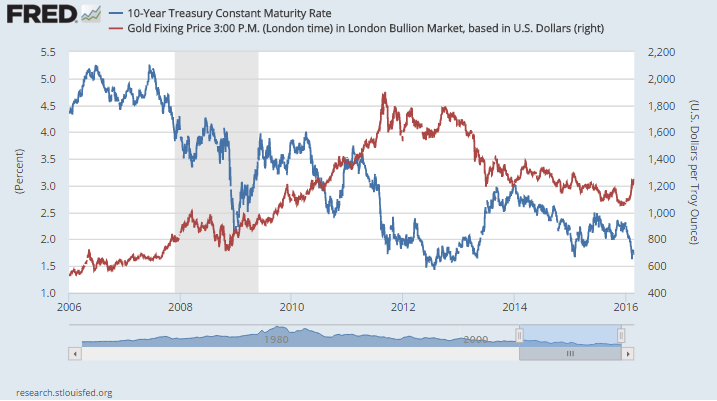 "We believe that the recent sharp rally in the gold price is a selling opportunity," says a note from commodity strategist Jesper Dannesboe at French investment and London bullion market-maker Societe Generale, calling the move "unsustainable".
"The gold price appears to be discounting no further Fed rate hikes this year and very little tightening next year [but] our economists expect the US economy to withstand the slowdown in emerging markets."
Commodity prices meantime extended their rally on Tuesday, taking Brent crude oil back to $37 per barrel – fully one third above January's new 13-year lows.
Silver prices also rose, but failed to hold above $15 per ounce – a level reached on the way up in late 2007, but lost in late 2014 and again a year later.