END_OF_DOCUMENT_TOKEN_TO_BE_REPLACED

GOLD BULLION rallied just $3 off a 1-week low versus the rebounding Dollar on Thursday as world stock markets fell after notes from the Federal Reserve showed the US central bank expects to keep raising its key interest rate in 2018.
China's stock market opened sharply higher on the first trading day of the new Year of the Dog, but Hong Kong fell hard with the rest of Asia.
Shanghai's gold market returned to find global wholesale bullion prices $10 lower from before the Chinese New Year holidays, down at $1324 per ounce.
The Shanghai gold premium – offered for metal shipped into the world's No.1 consumer nation – held around $6 per ounce, one-third below the typical average.
European equities also dropped after Wall Street "nosedived" overnight following the release of the Fed's January meeting minutes, widely read as " pointing to more rate hikes ahead."
"Almost all participants continued to anticipate that inflation would move up to the Committee's 2.0% objective," the Fed minutes said, calling "economic growth above trend" and the labor market "strong".
With inflation rising, "bond prices are likely to fall [further] and equities are looking heavy," says a new report from commodity-broking Australian bank Macquarie, advising that "an allocation to commodities [is] likely to add significantly to a balanced portfolio."
Chiming with analysis from US investment bank J.P.Morgan earlier this week, "Much of the focus is on the benefits of precious metals as an inflation hedge," says Macquarie, "[but] gradually increasing inflation is also supportive for the industrial commodity complex."
Rather than falling alongside stocks and bonds, "We expect the correlation between commodities and equities, as well as [between] commodities and bonds, to be very low," the report concludes. 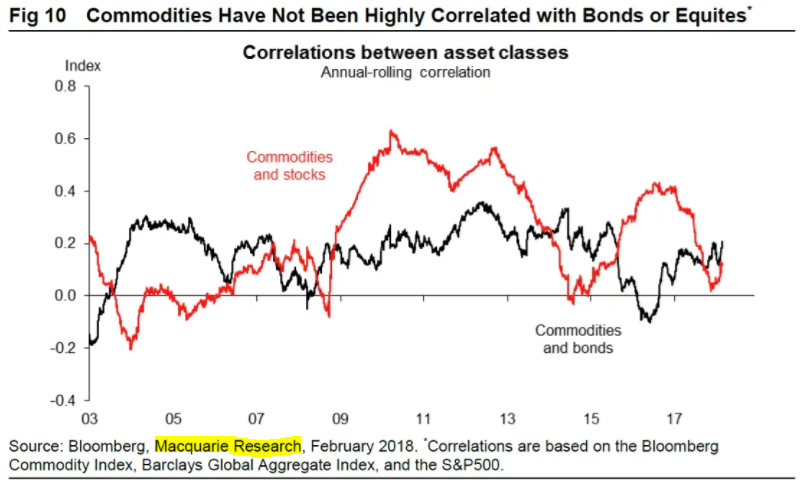 "When inflation is higher and more volatile, as it was in the 1970s," says analysis from $2.4 trillion asset management giant Fidelity, "the correlation between stocks and bonds increases, because rising inflation negatively affects the performance of both.
Alongside commodities, short-duration bonds, real estate, and natural-resource producer stocks, Fidelity adds, gold bullion "has historically been viewed as a store of value relative to paper currencies, which tend to lose value when inflation rises."
With gold falling as bond yields spiked Wednesday, gold's negative correlation with longer-term interest rates reasserted itself after breaking down in 2018 to date from the strongest inverse relationship in a half-decade.
"There's no way we can afford higher interest rates with this massive budget deficit," says long-time US asset manager and equity bear David Tice.
"Right now one should be concerned with return of principle, not a return on it," he told CNBC in an interview after the release of the Fed's minutes on Wednesday.
"I think cash, as anaemic as those interest rates are, is a good place to be...I do believe that gold [bullion] and gold stocks represent a phenomenal asset choice."
Silver prices meantime extended the overnight drop and Thursday bounce in gold bullion, rallying 0.6% from 2-week lows against the Dollar to trade at $16.50 per ounce.