END_OF_DOCUMENT_TOKEN_TO_BE_REPLACED

GOLD BULLION rallied 2.0% from an overnight drop to $1190 per ounce in London on Tuesday, rising back to $1215 as European stock markets lost earlier gains.
Commodity markets stalled after Monday's 4.7% bounce on the S&P GSCI index, while the Euro rallied from yesterday's sudden 1-week low to the Dollar.
Shanghai's main gold contract closed Tuesday level with London bullion quotes at $1200 per ounce, as Yuan prices retreated another 0.9% .
"Fears around China, oil and negative interest rates have likely been overstated in the gold price and other financial markets," says US investment bank – and London bullion market maker – Goldman Sachs.
Despite what other analysts call gold's "relentless rally" in 2016 so far, Goldman analysts Jeffrey Currie and Max Layton still target a drop to $1000 within 12 months for gold bullion, telling clients on Monday that they have "nothing to fear but fear itself" – a phrase used in 1933 by Depression-era US president F.D.Roosevelt shortly before he banned the private ownership of bullion, and then raised the official Dollar price of gold, in a bid to boost inflation and curb America's worsening debt-deflation.
"It's time to sell the fear barometer," say the Goldman Sachs analysts, urging clients to sell gold short using derivatives contracts, because "Systemic risks [to financial stability] stemming from the collapse in oil and commodity prices are extremely small."
Betting on a rise in US inflation expectations was one of five "top trades for 2016" which Goldmans had already advised clients to close at a loss before the end of last week, alongside betting on a rally in the US Dollar, outperformance by US banking stocks, and a rise in Italian bond yields.
That left only one "top 2016 trade" still in place, betting on stocks in non-commodity exporting nations against emerging-market banks.
Consumer-price inflation in the UK slowed to 0.3% annually last month, new data showed Tuesday.
Consensus forecasts for US consumer-price data, due Thursday, expect inflation to show a surge to 1.3% per year from December's annual rate of 0.7%.
That would mark the fastest percentage point jump in 1 month since March 2011. 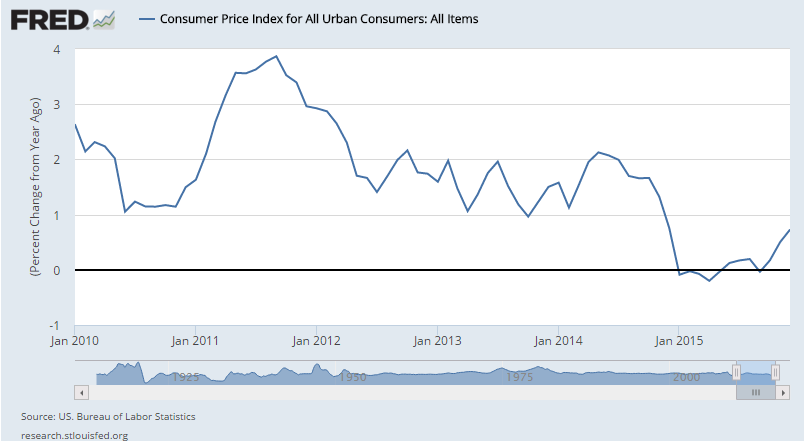 Technical analysis from French investment bank and London bullion market maker Societe Generale says the gold price was "clearly overstretched" at last week's high of $1263, "suggesting possibility of a near-term retracement towards $1212/1200...likely to be an important support near term."
"We would expect [the gold] price to ideally stabilise circa $1200/1192," counters Karen Jones' latest weekly technical chart-book for German financial services group Commerzbank, pointing to gold's October high.
"The weekly close above the 2014-2016 downtrend completes a large bullish falling wedge pattern...[with a] key break up point at $1200.
"We are currently viewing this sell off as a ‘return to point of break out’," Jones concludes, again targeting $1450 longer term.