END_OF_DOCUMENT_TOKEN_TO_BE_REPLACED

GOLD BULLION failed to rise above yesterday's lowest prices for the first time in February on Wednesday morning in London, trading 1.5% beneath Monday's 7-month high of $1200 per ounce ahead of US Federal Reserve chief Janet Yellen giving semi-annual testimony to Congress.
With the Fed chair expected to express "caution" about raising US rates after this year's financial turmoil so far, European stock markets rose for the first time in 8 trading sessions, and commodity prices also gained, led by a bounce in crude oil from near 14-year lows beneath $28 per barrel.
US government bond prices slipped, edging 10-year Treasury yields higher from yesterday's new 12-month low of 1.72%.
Ten-year yields have now fallen by one-quarter since the Fed finally raised its key interest rate from 0% in mid-December.
Trading in Fed Funds futures contracts now puts the odds of a second hike being delayed until at least February 2017 at almost two-in-three. 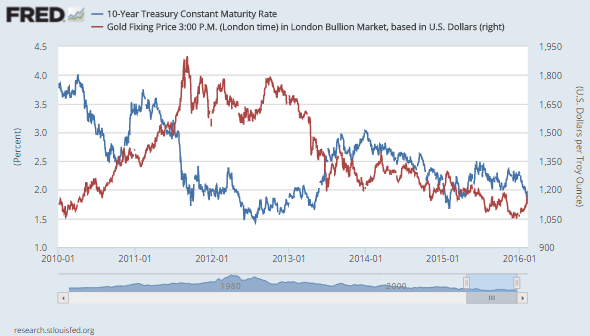 "Gold needs a bit of impetus up here if it is to move higher," says a note from London brokerage Marex Spectron, "and I doubt that Yellen will provide that."
But "as long as equities get battered," says one London bullion bank's sales-desk, "we shall continue see gold out-performing."
The twice-daily LBMA Gold Price auction found a morning clearing price at $1183.40 per ounce, failing to beat both the previous day's AM and PM benchmarks for the first time in February, and only the 6th time in 27 trading days of 2016 so far.
Down 0.6% from Tuesday afternoon's benchmark, this morning's benchmark – which saw the volume of bullion matched at this regulated 'tatonnement' auction of gold retreat from yesterday's pop to a 1-week high – also marked the sharpest PM to AM drop in more than a month.
"Fearful savers have driven up the gold price by flocking to the safe haven investment," reported today's edition of the Daily Mail, the UK's biggest selling newspaper behind red-top tabloid The Sun, and publisher of the world's busiest news website.
"The pace and magnitude of gold's early February rally has been impressive," says Swiss investment and bullion bank UBS analyst Joni Teves.
Cautioning that $1200 is a "key psychological level" and the market "may need to consolidate and digest" the New Year's 12% surge, "Macro conditions remain supportive for gold," says Teves – the most bullish LBMA gold price forecaster in 2016's survey.
"Dollar weakness also helps."
The Dollar rallied from near 4-month lows versus the Euro ahead of Fed chair Yellen's testimony Wednesday, while New York equity futures pointed higher after yesterday's sharp reversal and losses.
For gold bullion, "It seems that $1200 marks fairly formidable resistance," says a trading note from Swiss refiner MKS's Asian desk, "with profit-taking likely to be thick above that."
But gold prices should now "remain supported" MKS adds, "provided the shift out of risk continues [plus] the belief the Fed will avoid any further hikes this year."