END_OF_DOCUMENT_TOKEN_TO_BE_REPLACED

GOLD BARS traded in London's wholesale market recovered from their fourth dip below $1320 per ounce in 4 days on Tuesday, returning from the UK's summer Bank Holiday near 5-week lows as betting rose that the US Fed will raise its key interest rate at this month's FOMC meeting despite an expected slowdown in US jobs creation.
Wall Street consensus says Friday's official estimate of non-farm payrolls will show a rise of 180,000 for August, well down on July's surprise 255,000 jump.
The Federal Reserve then meets to announce policy on 21 September.
"Gold remains range-bound within a descending triangle over the past month," said a note from traders at gold refiner and bar manufacturers MKS Pamp.
"With investors pricing in a greater likelihood of a Fed rate increase before year end, pressure is likely to continue to weigh. Next focus for traders will be on...Friday's employment data to gain more insight."
"Every figure will be scrutinized and every Fed speaker will be closely followed," agrees a trading note from futures and wholesale gold-bar brokerage Marex Spectron's London office.
"Forget normal fundamentals, forget technicals, forget most things that all of us are used to watching for clues. Just watch the data out of the US and all the headlines that go with it."
"While giving a nod to improving economic conditions," said Japanese conglomerate Mitsubishi's analyst Jonathan Butler in a note last week, "the Fed [must] emphasise the data dependency of any rate decision, and how dampened inflation expectations will warrant further patience before raising rates.
"All this is essentially favourable for bullion in the medium term."
US Fed vice-chairman Stanley Fischer told Bloomberg News on Tuesday that the US is close to full employment, repeating a comment he made 12 months ago.
August 2015 also saw Fischer call low inflation a "temporary" phenomenon, something he again repeated in a speech last week.
But "the latest data show a deceleration in inflation," counters The Economist magazine, "clock[ing] in at 0.8% year-on-year in July" while financial markets and consumer surveys also point to falling inflation expectations.
"Not even the FOMC seems to believe low inflation is transitory," the magazine goes on, noting that – amongst US Fed voting members – the highest forecast rate of inflation "is just 2.1%, arriving by the end of 2018."
US and other major government bond prices held firm Tuesday, but UK Gilts fell – pushing interest rates higher – after new data showed the UK's broad money supply growing 7.0% per year in July.
That was the fastest pace since September 2007, when the collapse of over-geared mortgage lender Northern Rock marked an early stage in the global financial crisis. 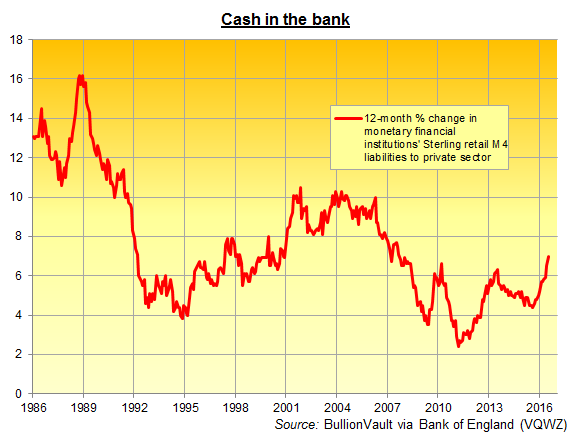 The Euro today retreated to 1-week lows at $1.1165 on the forex market, helping edge gold bar prices for Eurozone investors back above €1180 per ounce – some 1.2% above last week's 2-month low.
Shares in Apple Inc. (Nasdaq:AAPL) meantime slipped 1% in pre-market trade after the European Commission ordered the Irish government to demand €15 billion in back taxes, undoing what the EC claims was a "sweetheart" deal to attract the tech giant's European HQ and secure jobs.
Ireland's finance minister said Dublin " profoundly disagree[s]" and Apple Inc said it will also appeal the decision.