END_OF_DOCUMENT_TOKEN_TO_BE_REPLACED

GOLD PRICES in GBP touched new 3-year highs at £1070 per ounce on Wednesday as the British Pound sank to new 3-decade lows on the currency market amid a fresh plunge in world stock markets, commodity prices and government bond yields.
Sterling's Dollar value (GBP/USD) sank to $1.28 in overnight Asian trade, while gold prices shot higher in heavy Shanghai trade.
Sovereign debt from across the developed West today offered new record-low returns to buyers, with the total now paying negative rates – and guaranteeing a loss of value to investors on redemption – reaching towards $10 trillion.
Ten-year US Treasury bond yields fell to new record lows of just 1.35% per year.
Shares in German financial services giant (and former London bullion-market maker) Deutsche Bank meantime hit a new all-time low, halving from the start of the year, while German 10-year Bund yields fell towards new record negative returns of -0.20% per annum.
London's FTSE100 share index fell 1.6%, less badly than Frankfurt and Paris, but the more UK-focused 250 index extended its post-Brexit drop to 10%.
Insurance firm Aviva yesterday joined its Standard Life and M&G competitors in shuttering a UK real-estate investment fund to investor withdrawals.
Gold priced in GBP has only ever traded higher than Wednesday's AM benchmark on 203 working days, split between summer 2011 to spring 2012, and then late 2012 to spring 2013's historic precious metals crash. 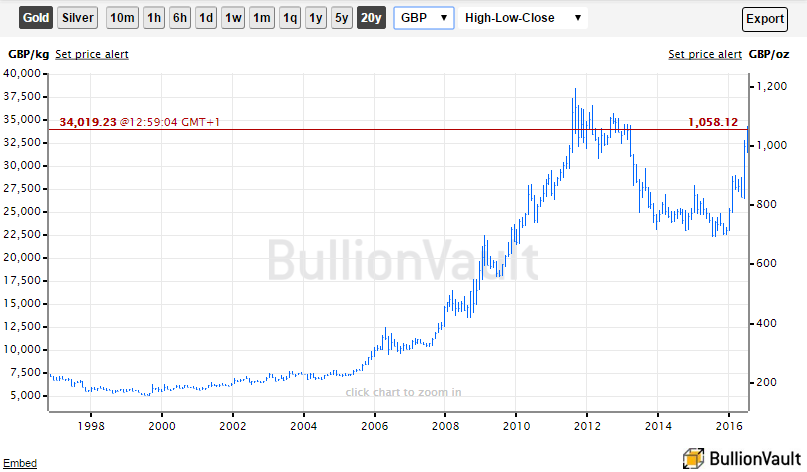 With UK prime minister David Cameron set to stand down after losing the Brexit vote, and his Labour opposite Jeremy Corbyn already losing a parliamentary party vote of no confidence, the long-delayed Chilcot Report into the 2003 invasion of Iraq today said former PM Tony Blair went to war "before peaceful options for [Baghdad's] disarmament were exhausted," backed by "flawed intelligence and assessments."
"We have been flagging the upside risks to our [previous gold price] views for some time now," says a note from Swiss bank and bullion market-maker UBS's London analyst Joni Teves.
"The UK's vote to leave the EU further underpins gold's macro narrative, reinforcing the themes of further dovish shifts in monetary policies, consequently lower yields, and heightened uncertainty."
Now hiking her second-half 2016 gold price forecast in Dollars to $1400, Teves was already the most bullish professional in the London Bullion Market Association's 2016 forecast competition at New Year, predicting a full-year average of $1225.
Tuesday's PM benchmark in London took 2016's average to date up to $1223 per ounce, already 11% above of 2015.
Only Martin Murenbeeld of Dundee Economics in Australia forecast a peak 2016 price above yesterday's PM benchmark, predicting an annual average of $1135 with a high of $1375.