END_OF_DOCUMENT_TOKEN_TO_BE_REPLACED

GOLD PRICES retreated Wednesday lunchtime as the Dollar index rose ahead of the US central bank's Federal Open Markets Committee meeting minutes due to be released later today.

The FOMC minutes are due at 6pm GMT and are likely to reveal a Fed that sees fewer hurdles to an interest rate hike. In its post-meeting statement  on July 27, the Federal Open Market Committee said “Near-term risks to the economic outlook were diminished.”

“We’re edging closer towards the point in time where it will be appropriate, I think, to raise interest rates further,” Dudley said when asked whether the FOMC could vote to raise the benchmark rate at its next meeting Sept. 20-21.

Atlanta Fed President Dennis Lockhart also said he has confidence in the outlook for the U.S. economy and, as a result, wouldn’t rule out “at least one” interest rate hike this year in a speech to the Rotary Club of Knoxville, Tenn., on Tuesday.

Holdings in the SPDR Gold Trust (NYSEArca:GLD) increased 1.8 tonnes on Tuesday to 762.23 tonnes after losing 11.9 tonnes last Friday, which was the largest 1 day outflow since 12th July 2016.

The SPDR Gold Trust has swelled by 27% year to date and hit a two-year high of 982.72 tonnes in early July. 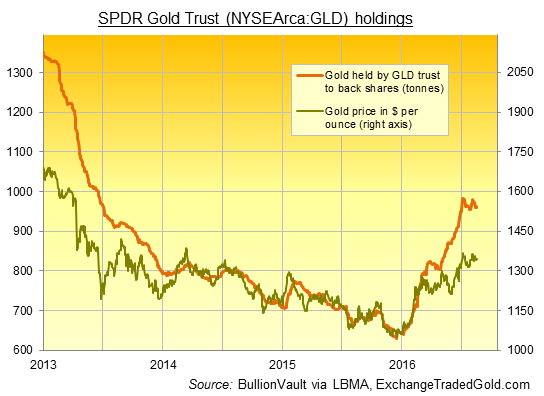 A number of big-name hedge fund managers have cut back their exposure to gold during the second quarter according to their latest quarterly 13-F filing with the Securities and Exchange Commission (SEC) published on Monday.

Stanley Druckenmiller, who runs Duquesne Capital, closed his entire position in the SPDR Gold Trust, which had been his fund’s biggest allocation.  Druckenmiller still owns just over 1.82 million shares of Barrick Gold.

While Soros increased its bearish bet on the stock market, he also cut back his stake in Barrick Gold, selling 18,348,235 shares in the second quarter. At the end of the quarter he held 1,071,074 shares of Barrick Gold, a position worth just over $22.8 million.

In line with George Soros, Lord Rothschild, chairman of RIT Capital Partners, is pessimistic on the outlook for financial markets and has moved to reduce the trust's exposure to stock markets from 55 per cent to 44 per cent since the start of the year.

Some of the proceeds have been used to buy gold and other precious metals, which, at the end of June accounted for 8 per cent of the £2.8 billion portfolio according to the trust's half-year results, released yesterday.

Asian shares have stepped back from a one-year high. MSCI's broadest index of Asia-Pacific shares outside Japan dipped 0.05 per cent on Wednesday while Japan's Nikkei rose 0.4 per cent, paring some of Tuesday's sharp losses as USD/JPY dipped under 100.

Fed funds futures implied 52.4% odds for a rate increase by December, compared with 41.9% previous day according to FedWatch Tool.