END_OF_DOCUMENT_TOKEN_TO_BE_REPLACED

BUY GOLD prices headed for their 4th sharpest weekly rise of 2016 to date on Friday in London, coming within $2 per ounce of March's 13-month peak as world stock markets fell with the US Dollar and commodities edged higher again.
The Dollar fell near 3-month lows against the British Pound and 2-week lows versus the Euro after first-quarter data showed GDP across the 19-nation Eurozone – the world's single largest economic bloc – growing faster than either the US or UK figures released earlier this week.
The 330-million citizen curency union, however, then slipped back into annual consumer-price deflation of 0.2% this month, led by an 8% drop in energy costs.
The Central Bank of Russia meantime held its key interest rate at 11%, following the US Federal Reserve and Bank of Japan in making no change to policy at this week's scheduled meetings.
Prices to buy gold in Rubles fell – bucking this week's trend for all major currencies bar the Japanese Yen – as the Russian currency rose to its highest US Dollar value since November on the FX market.
Dollar investors wanting to buy gold Friday saw the price touch almost $1281 per ounce, trading 3.4% above last week's finish.
"I believe that, in a more interconnected world, labor slack should be assessed in a global context," said  US Fed 'dove' Robert Kaplan in a speech in London on Friday, "[because] excess capacity outside the US may dampen inflation pressures in the US at a given level of unemployment.
"The effort to 'normalize' monetary policy is important [but] removal of accommodation  should be done gradually and patiently...From a risk-management point of view, our monetary policies have an asymmetrical impact at or near the zero lower bound."
"With the Fed effectively taking itself out of the rate hiking business at least until June," says a note from US brokerage INTL FCStone, "it seems that the path of least resistance for gold and the rest of the precious metals group is higher still over the short-term, as the Dollar sell-off shows no sign of easing."
But "if Fed rate hike expectations return to the market," counters German financial services group Commerzbank, "we see correction potential for silver...together with gold...following its sharp price rise in recent weeks."
Should the US Dollar strengthen ahead of the Fed's June meeting, "the silver price could then fall to as low as $15 per troy ounce," it warns, pointing to speculation as the driver of this latest jump.
Global demand to buy gold jewelry, coins, bars and for industrial use fell 24% year-on-year amid January-to-March's strongest quarterly price rise in 30 years, analysts Thomson Reuters GFMS said in a new report this week.
Dollar prices have this month averaged 5% above the Q1 average, but slipped $6 per ounce to $1240 per ounce from March, the highest monthly average since January 2015. 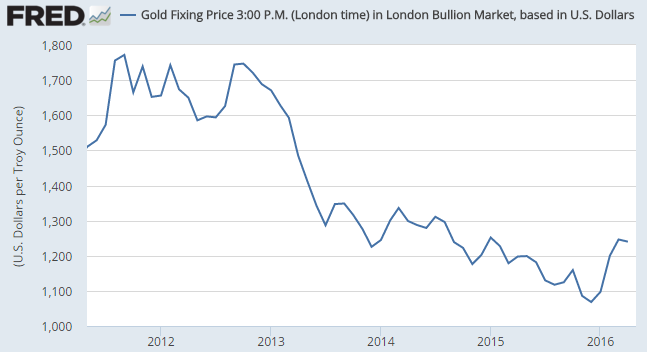 Silver today matched the 2016 rise in prices to buy gold, extending the week's 4% jump to reach the highest level since January last year above $17.85 per ounce.
With several major gold miner companies reporting larger output this week for the first 3 months of the year, new data from China – the world's No.1 gold mining nation since 2007 – meantime said Friday that it produced 0.8% more gold in Q1 than the same period last year.